“How many hills must on old man ride up, to prove he’s a really silly old man?” is the song Bob Dylan http://www.youtube.com/watch?v=DFvkhzkS4bw should write in his senior years.

Silly old men enjoying themselves. Don’t you know there is industry to be done, purpose, things to build, commitments. Why, modern life demands certain modes of behaviour.

So we set out from Newcastle, on the local train to Muswellbrook.  Some of us had gotten up at four am to catch the train to Newcastle. Mike McDonald and I had gone up the day before, spent the night in the Newcastle Beach YHA.

The train trip out was like a transition zone. Leaving behind the certainties, comforts and habits of everyday life, embarking into the zone of self reliance, simplicity, only the concentration on the effort of the next minutes.

For one of us, Steve Croker, this was his first touring trip. Steve was most nervous about the days ahead, in fact he was probably the fittest of all of us. Steve is a sometimes personal fitness trainer.

The rest of us were also nervous. The possibility of rain, equipment failure or personal injury are ever present. We had all done it before, and had chosen our own comfort levels.

On the train out to Muswellbrook we learnt Mike Roylance had to pull out, due to work interviews. We had all been through this mill, applying for own current jobs, rounds of outsourcing and redundancies.

The local train picked and dropped off university and school students, locals after a weekend in town.

The nature of the ride ahead dawned on us as our train passed the third coal train. We had seen them up and down the coast, but now these long behemoths http://en.wikipedia.org/wiki/Behemoth delivering climate change via offshore processing became ever present.

Through flat swamps we went, recent rain had changed the dry conditions.

So coffee in Muswellbrook, the last of non-Telstra phone reception and down a short stretch of the New England highway. At the top of the hill, the Wybong road stretched across an old bridge, snaked along a valley floor. Only forty k’s to Sandy Hollow, a short ride today. 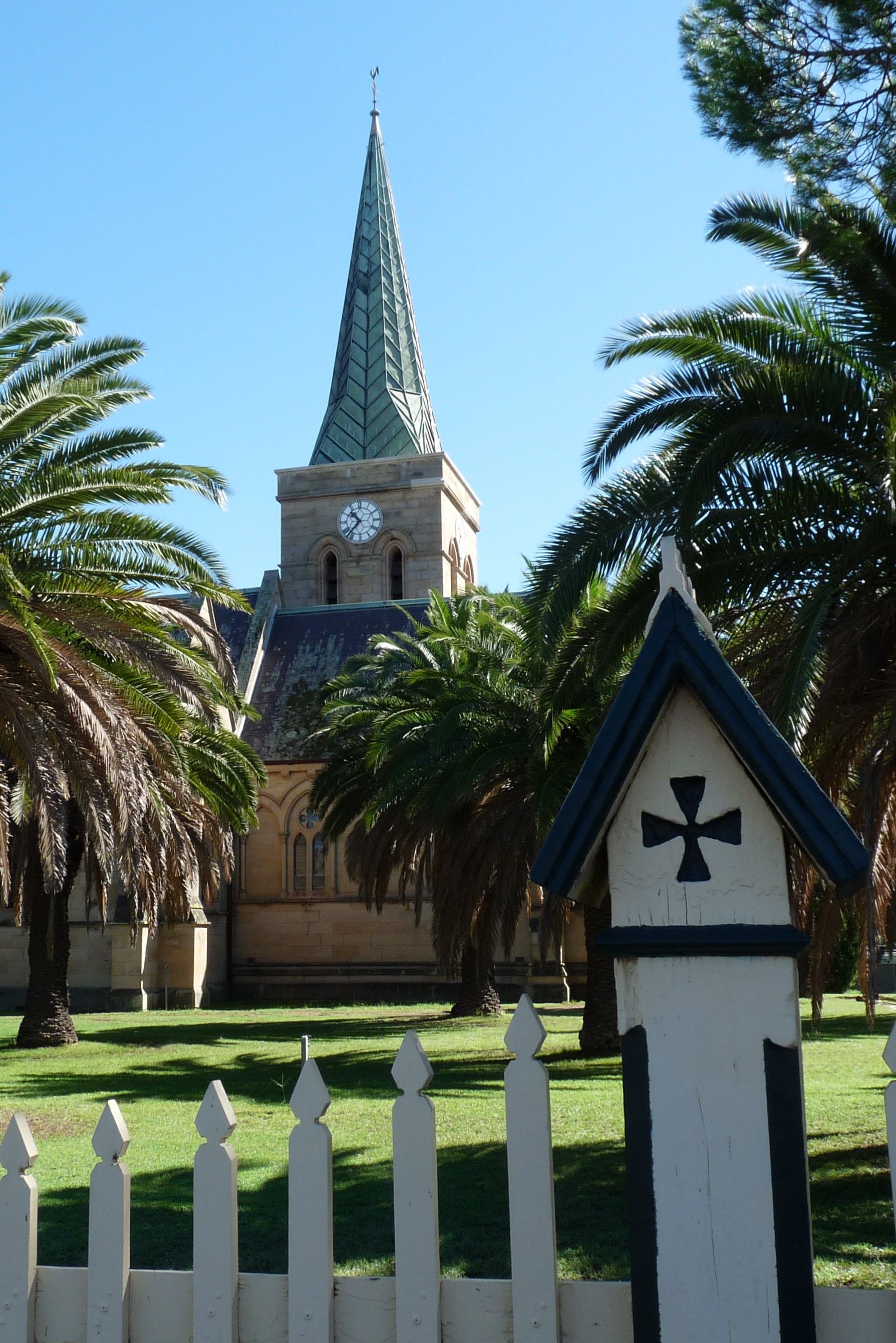 As we cruised along in the perfect cycling conditions, not too hot, brilliant sunshine, green countryside, I turned to Merv and remarked that I wished one of us could sing. I was thinking of “The hills are alive with the sound of music” http://www.youtube.com/watch?v=bQLCZOG202k

Alas, as we rode on, another song came to mind: “You paint paradise and put up a parking lot” http://www.youtube.com/watch?v=94bdMSCdw20, with the role of the parking lot taken by open cut mines. 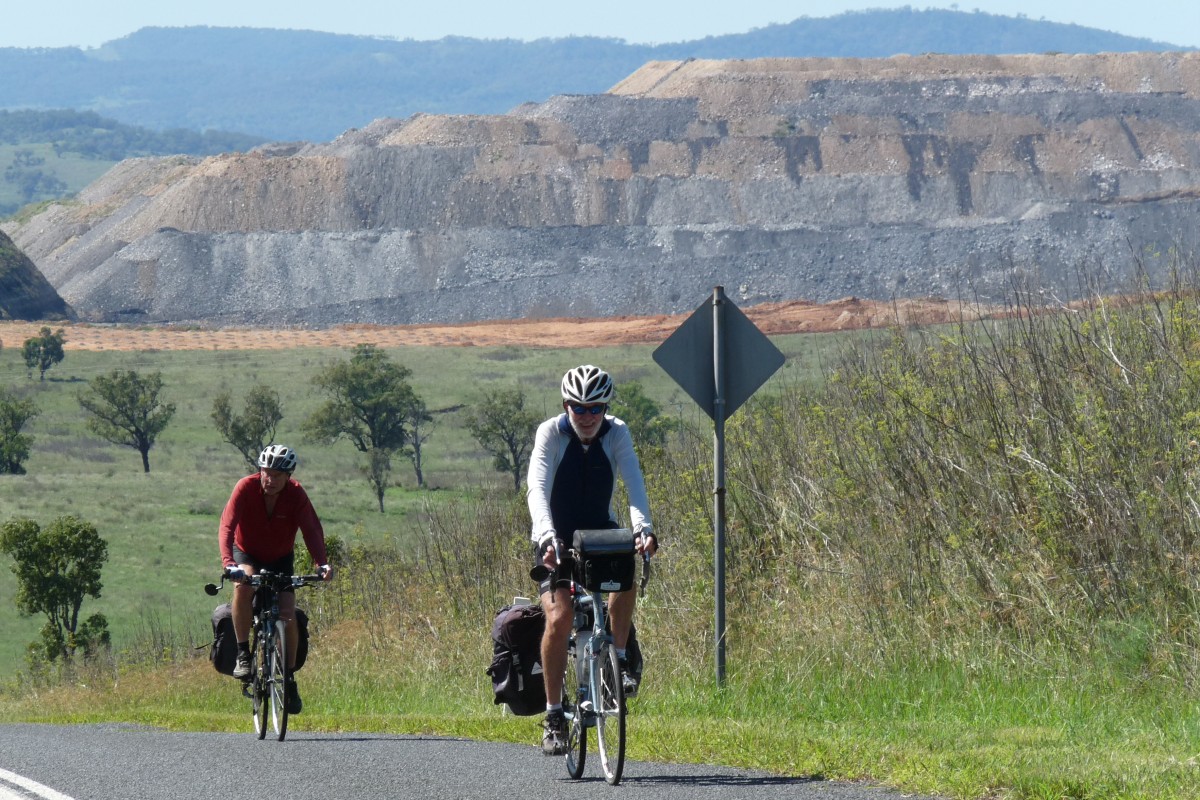 The short ride brought us into Sandy Hollow, the David Mahony Art Gallery and coffee shop being the first stop before the camping ground. 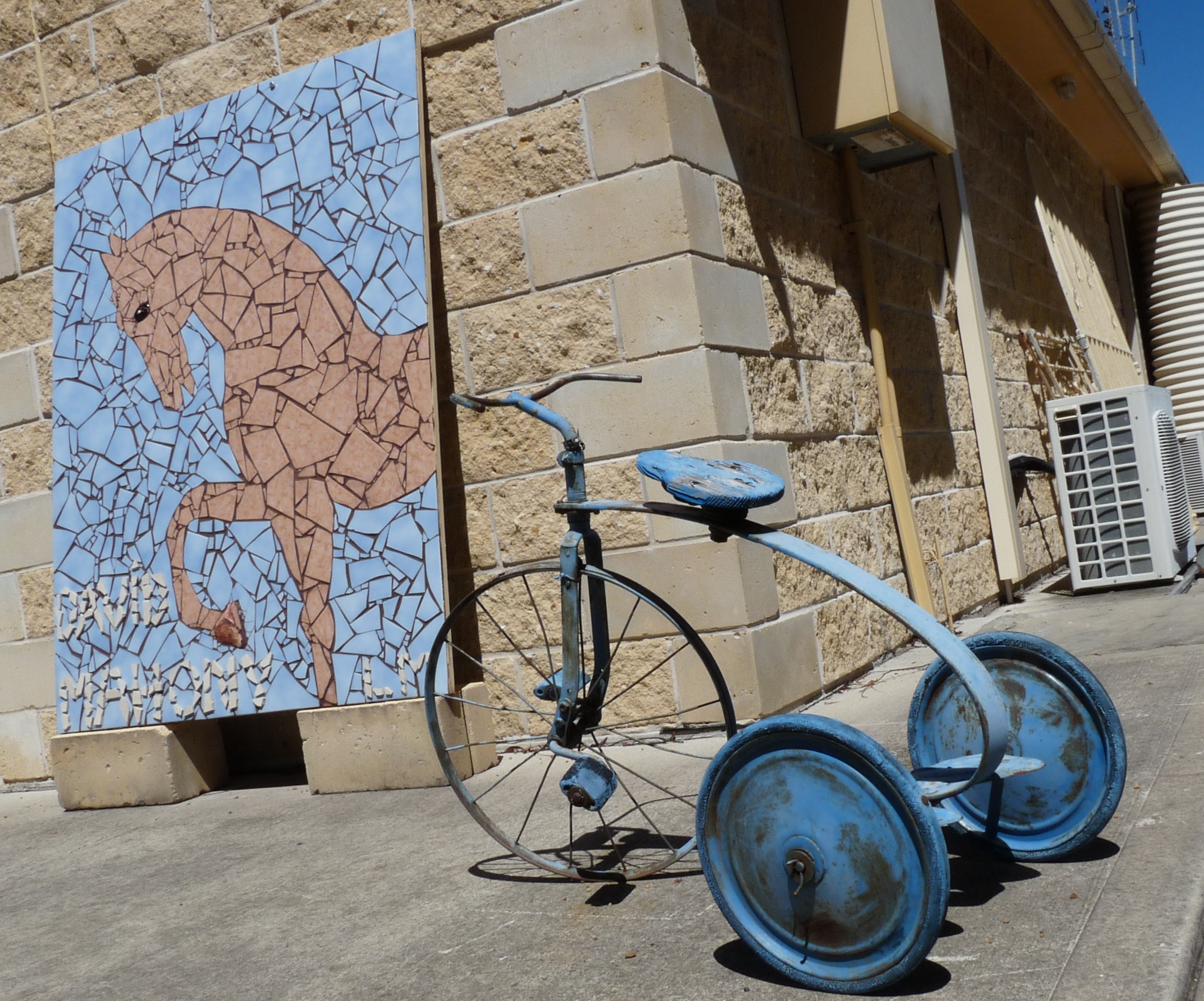 Behind the camping ground are the sandstone hills of the Giant’s Leap. Ian Meller and I took the short scramble up, and in classic guidebook-ese ‘were rewarded by stunning views of the valley below.” 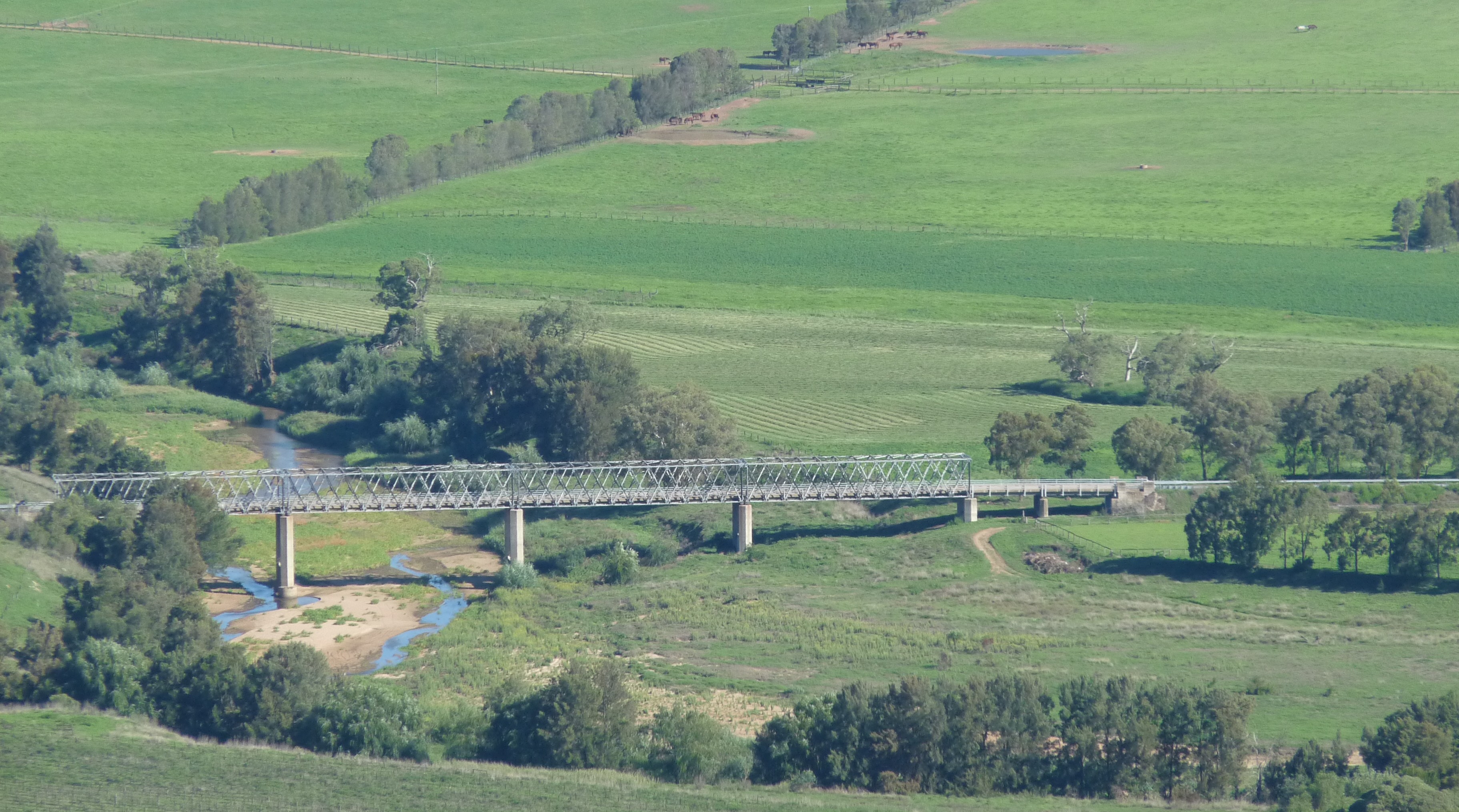 That night, after a quick drink at the pub, we had dinner in the road stop next door. The ‘Golden Highway’ to Dubbo was busy with mining industry traffic. We returned for breakfast the next day.

We took the Bylong Valley Way to Bylong, a junction with a roadhouse and camping ground. We kept a lookout for Edie Obeid’s family farm.

We had been to Bylong before, in June 2009. I made a photobucket album http://s767.photobucket.com/user/jwhonan/library/Bylong%20Ride?sort=6&page=1

The guest house run by the general store was not available, but another was, owned by the Andrews’ family, Tarwyn Park, famous for “Natural Sequence Farming”.  http://tarwynpark.com/about/ http://www.nsfarming.com/andrews.htm

The property next door was owned by Kepco, Korea Electric Power Corp, managed by Cockatoo Coal. There were numerous survey vehicles and test drilling sites on the property. The lady running the guest house said they had two more years before they had to move as well. 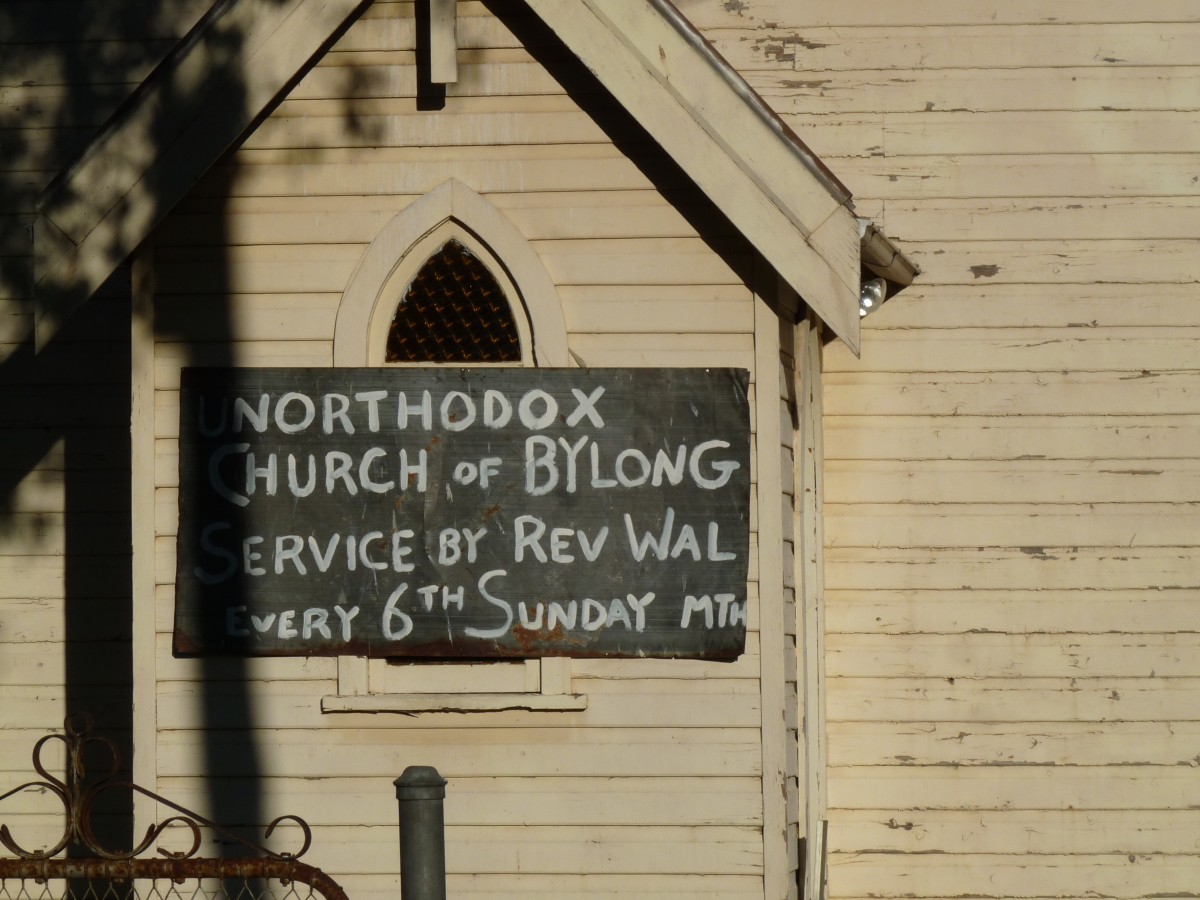 The next day we were to ride to Rylstone. There were some significant hills, but we were leaving the areas of intense mining exploration.

Rylstone had a couple of surprises for us. The first was that Mike Roylance could get away, and had ridden out from Lithgow to join us. It was wonderful to see Mike, a compadre from other rides. I particularly enjoy Mike’s unique Weltanschauung.  http://en.wikipedia.org/wiki/World_view

The second was a chance meeting with a lady called Megan, who had been on and off the road since 2009. She had a particular bike, setup just so. Her stories of riding were inspiring. One trip in particular struck me, from Kalgorlie to Alice. I think she was referring to the Great Central Road running for more than 1,100 kilometres from Laverton to Yulara http://en.wikipedia.org/wiki/Great_Central_Road. 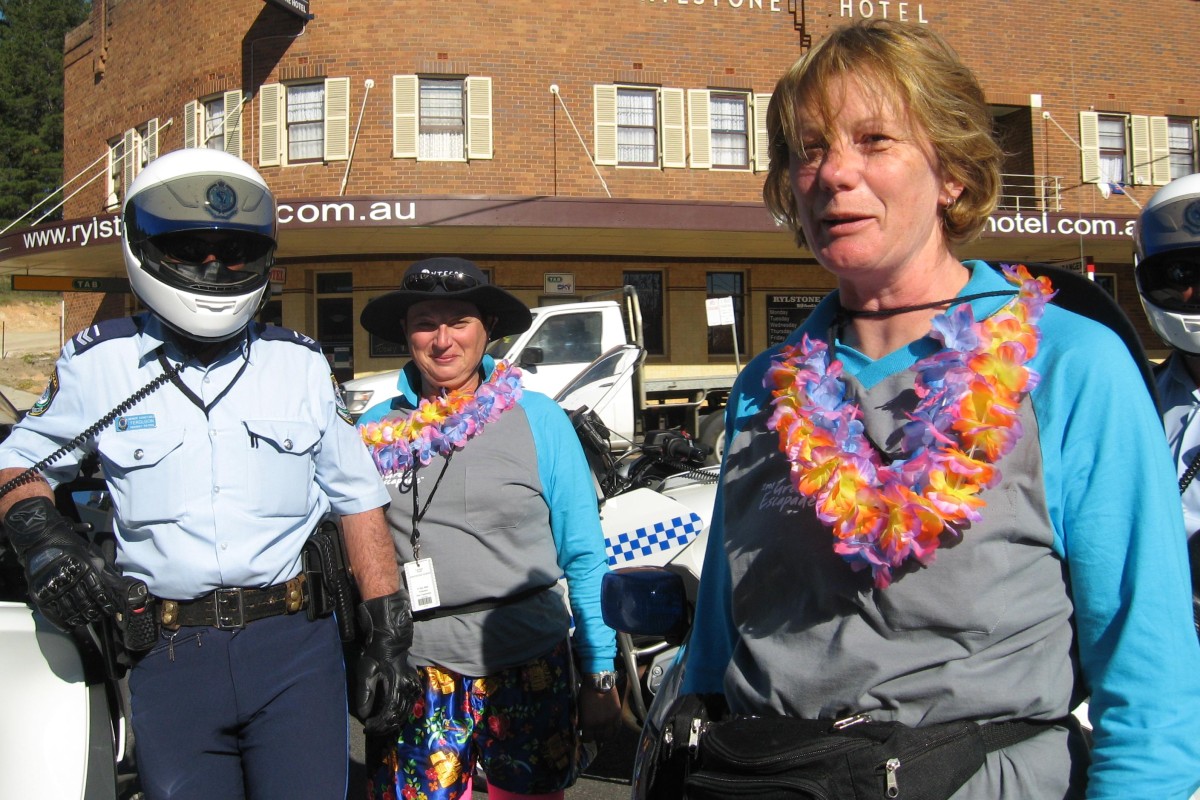 The next day were even more hills, on to Sofala. We rode through the cement town of Kandos. I later learnt that Kandos no longer produces cement, it is cheaper to import from China. Steve Croker departed us at Ilford, he had commitments on the Saturday. He rode directly to Lithgow to cut out a day.

Sofala proved a bit of disappointment. I think Ross described the locals whinging in the pub as tedious, I can only agree. The campers were very hardy, bedded down in the river bed with no amenities block. The accommodation in the gaol guest house made up for it.

More hills the next day, on to Bathurst. Some took the less busy road out of Wattle Flat, with a short dirt stretch, which proved to be a wise move. The shorter but hillier highway was busy with caravan traffic.

I caught up in Bathurst with my good mate Pete Sackett, from my flying club. I haven’t been out flying for a while. Pete took me on a short tour of Bathurst. Although Bathurst is doing well, with its diverse economy of agriculture, government and education, Pete himself is not doing too well. He runs an engineering design business. He showed me his portfolio book. Almost every project was to do with manufacturing, agricultural product processing, for example.

The high Australian dollar and cheap Chinese imports have wreaked havoc.  Although Pete is OK personally, he has had to wind his business down.

Mike MacDonald and John Ross left us in Bathurst, taking the XPT back home. Both had weekend commitments.

The next day, Bathurst to Lithgow via Tarana and Lake Lyall was the hardest of all. The hills were very steep around Sodwalls and from the lake into Lithgow. We just kept at it. 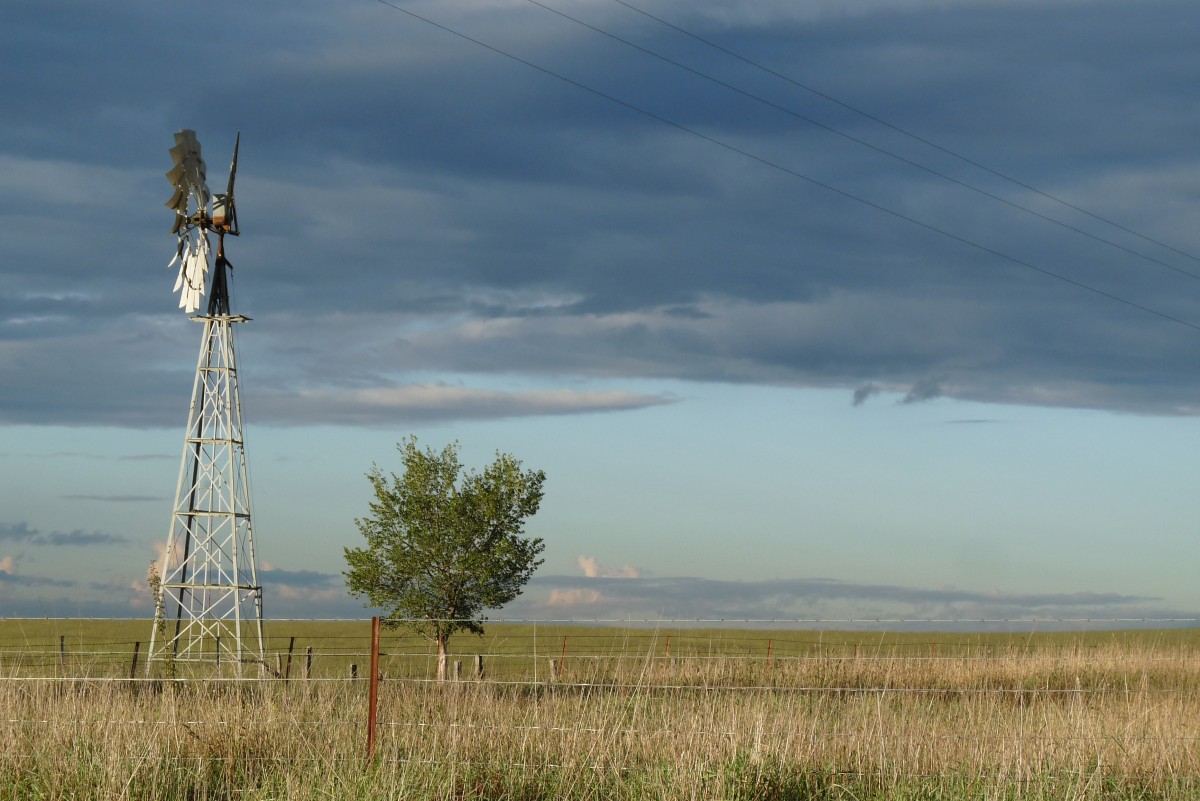 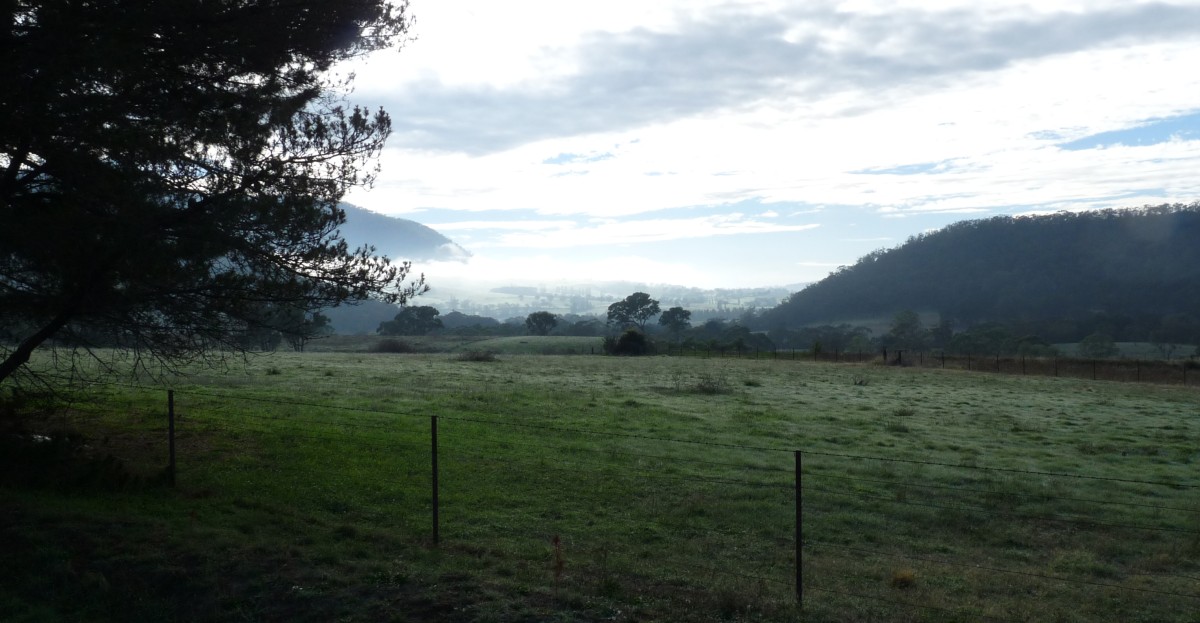 Bruce left later, leaving at the same time as the campers, but caught up to us. He had the unfortunate news that Ross Scott had his wallet stolen.

The train from Lithgow was the reverse transition of the first day. At Blacktown station we separated back to our daily lives.

One thought on “Muswellbrook to Lithgow”