Unlike dogs that sniff each others tails, cyclists that meet run their eyes discreetly over each others bikes.

Nothing concentrates the mind on personal comfort so much as sitting in a saddle and peddling for a few hours.

You can spend a lot or a little amount of money, but after a while, every little addition to your bike becomes a personal statement.

For touring, there are many different styles, and there is really no wrong or right combination. Some definitely are better than others, but pretty much all will get you from A to B in the end.

Here are some examples from the recent rail trail ride. 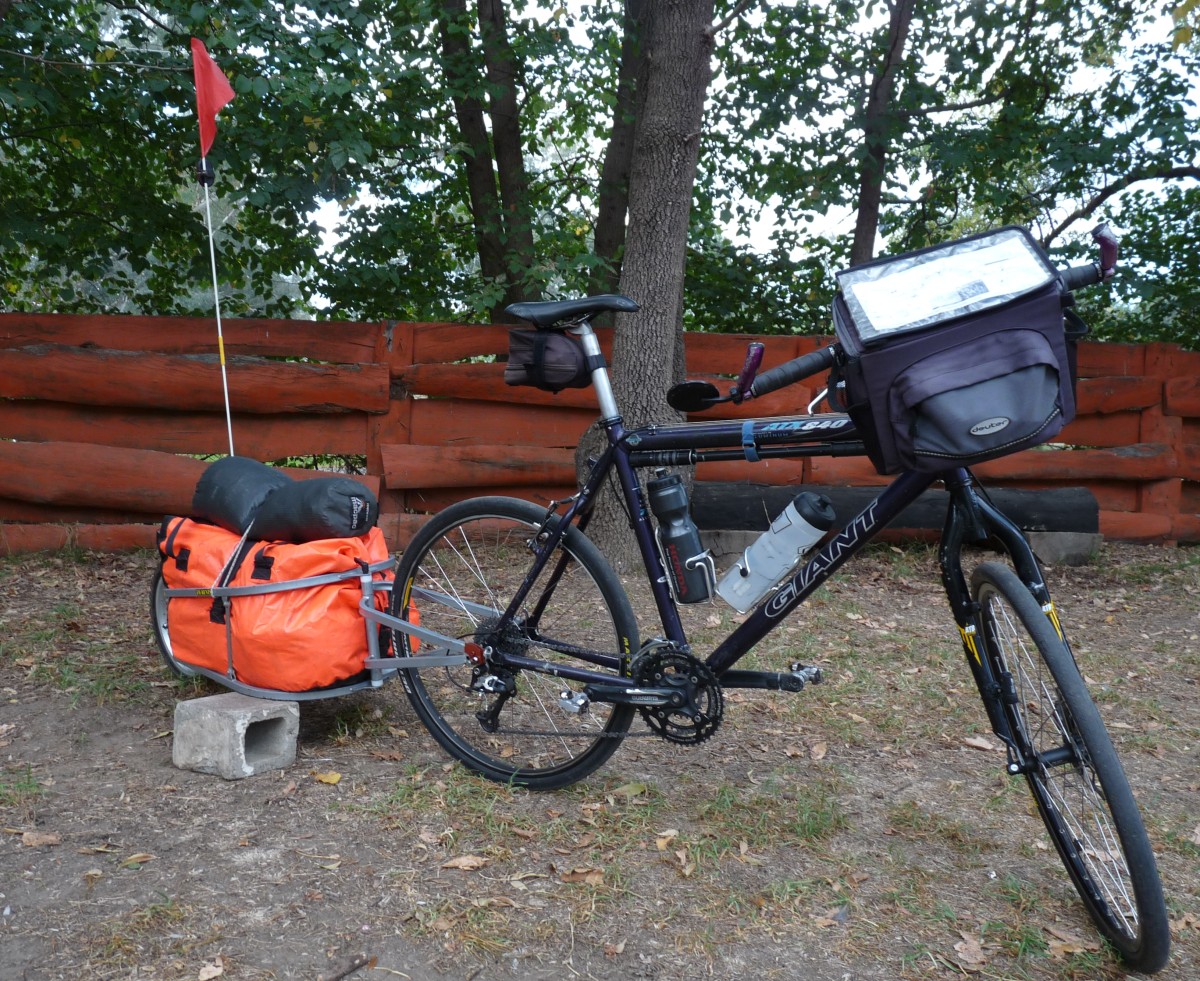 Above is Bruce Fry’s bike with a trailer. The trailer carried tent gear for both Bruce and Libby, who camped. 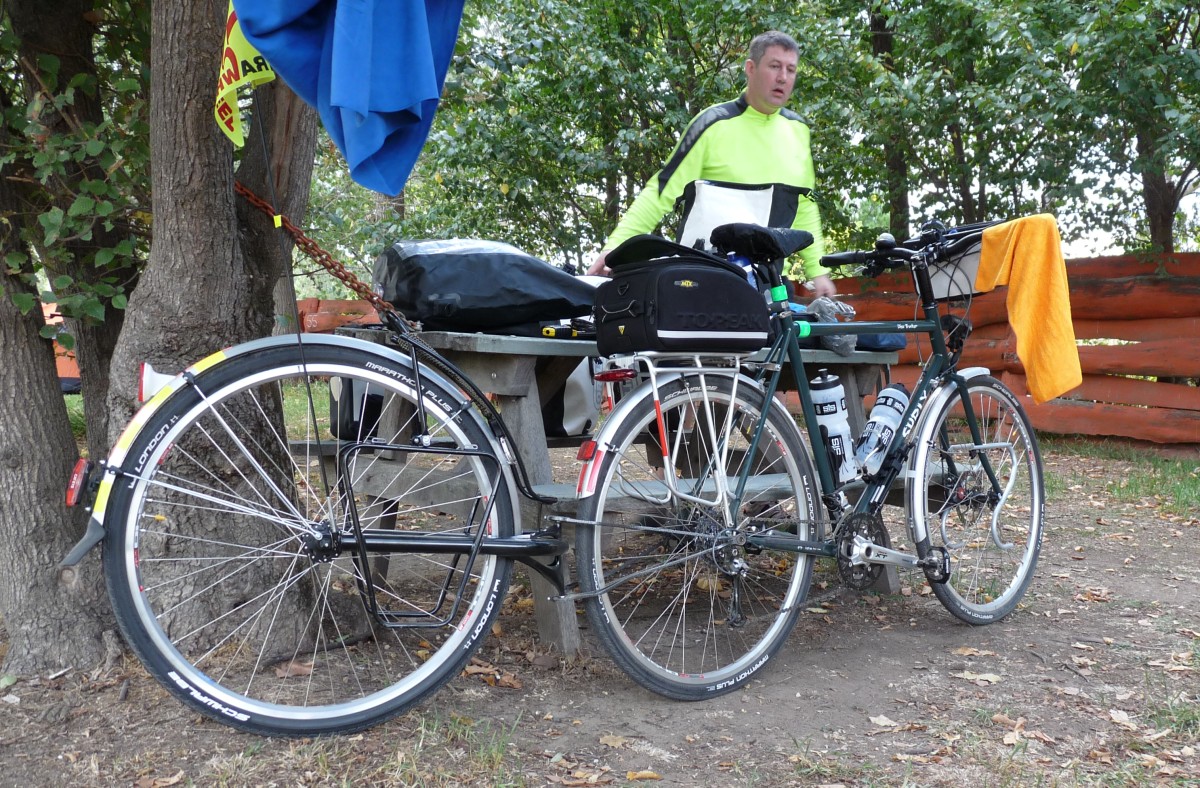 Similarly well thought out and researched is Mike Saunders bike, with a third wheel. Both the third wheel and trailer don’t put so much weight on the back wheel. Again this is only needed because Mike is camping. 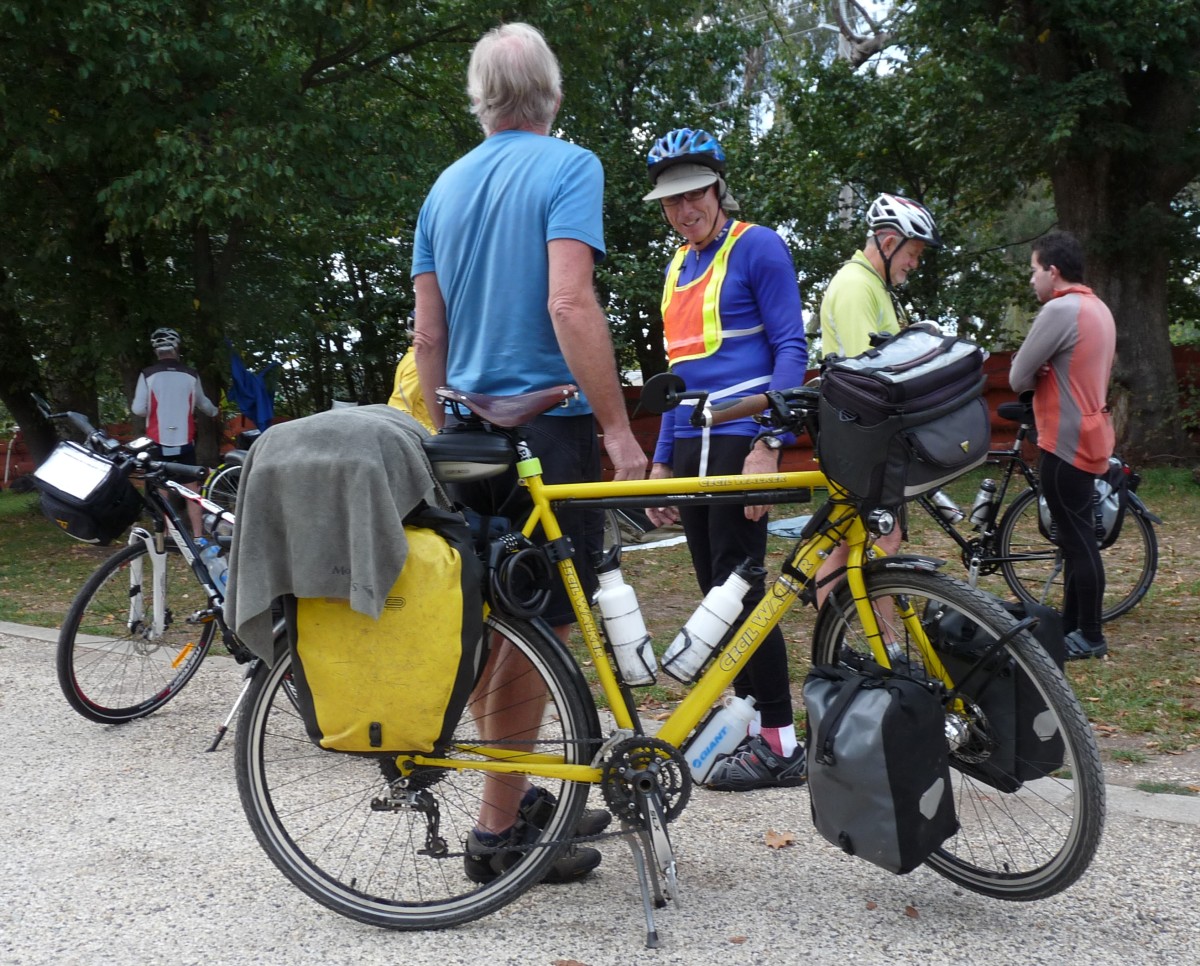 Rob Purse’s bike gets an admiring eye from Norm, who is also mechanically inclined. Rob’s bike is custom made. The centre stand always gets me, it certainly is handy. Rob also camps, but manages to fit everything into what you see here. Rob swears by his leather Brooks saddle.

Here you can see the camping gear that Rob manages to fit in. 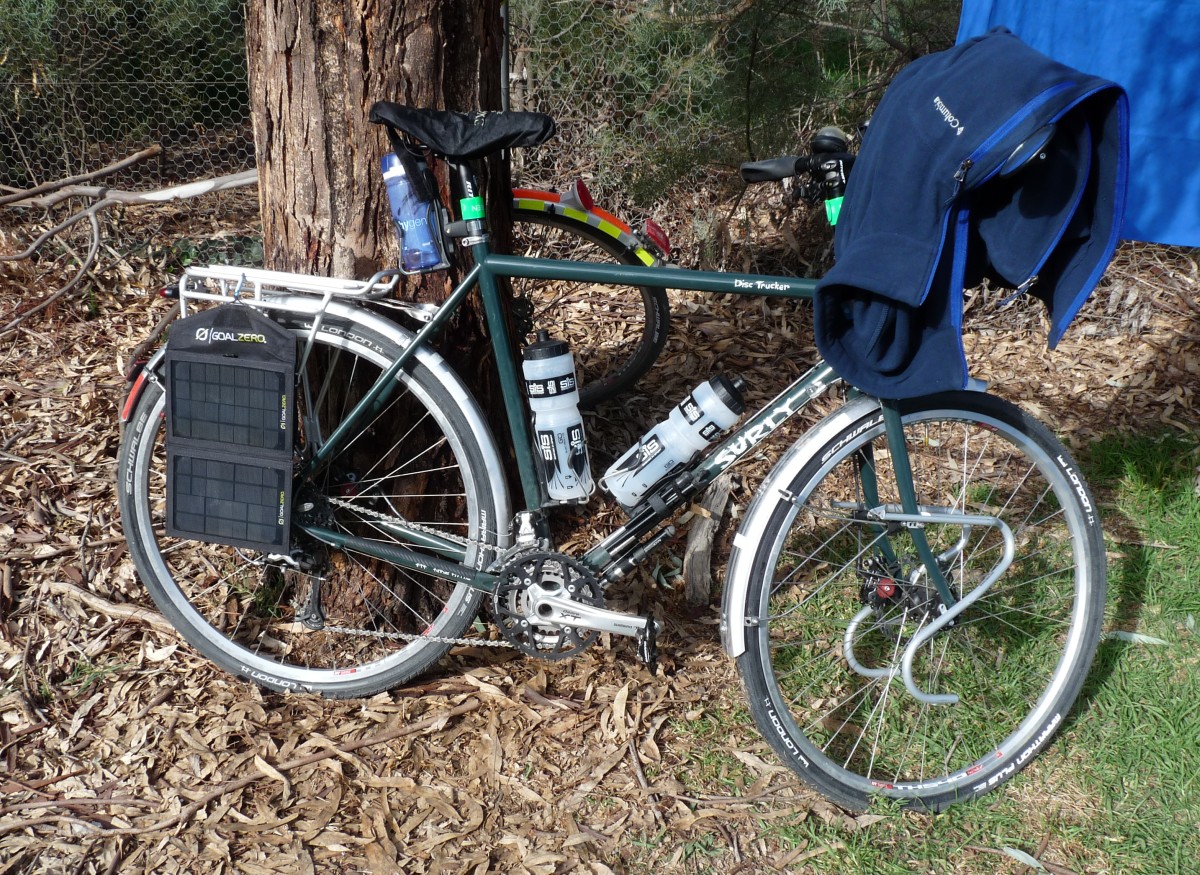 Mike Saunders has a couple of electronic gadgets, phone and GPS, and has a portable solar charger. It is not as good as a 240 volt power outlet. 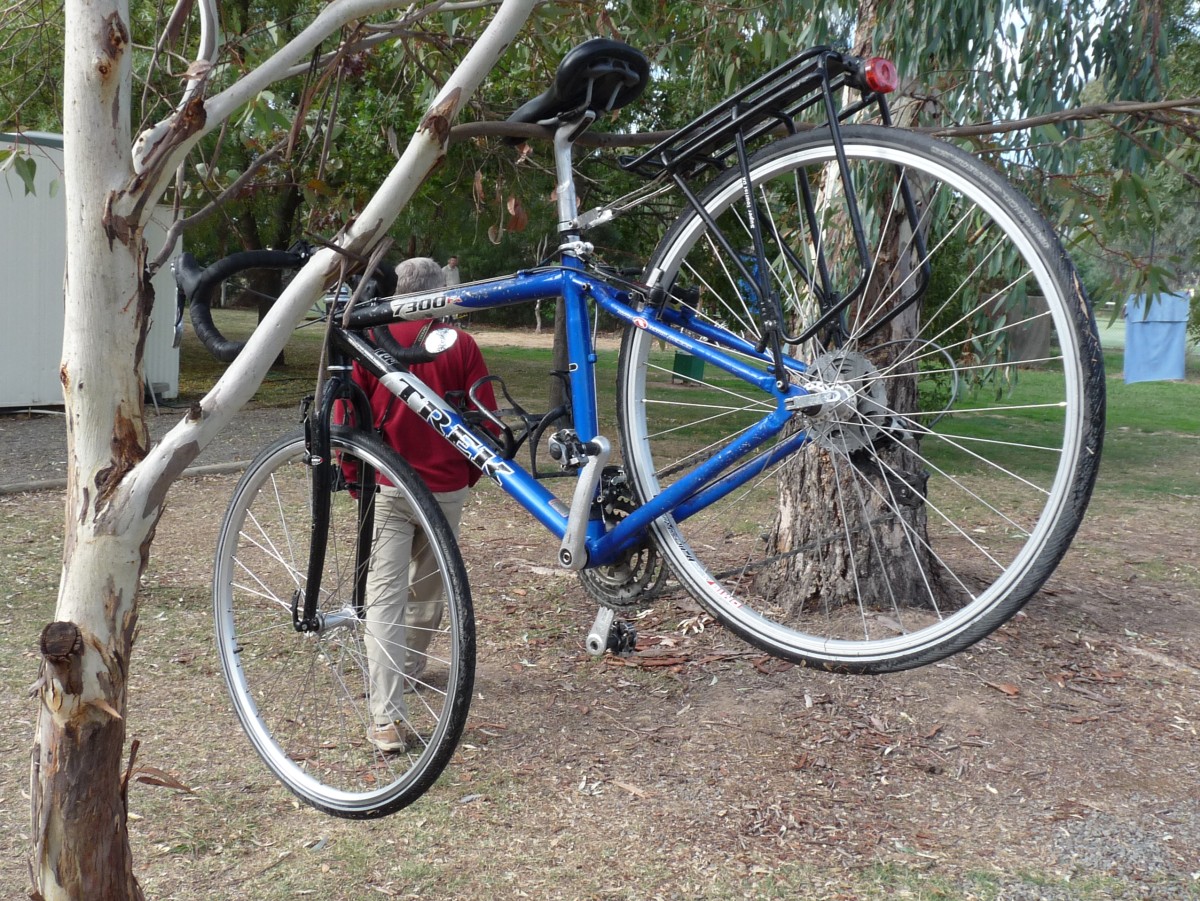 On the road you have to improvise a bit. Bruce Fry found and convenient branch to help in his bike cleaning. 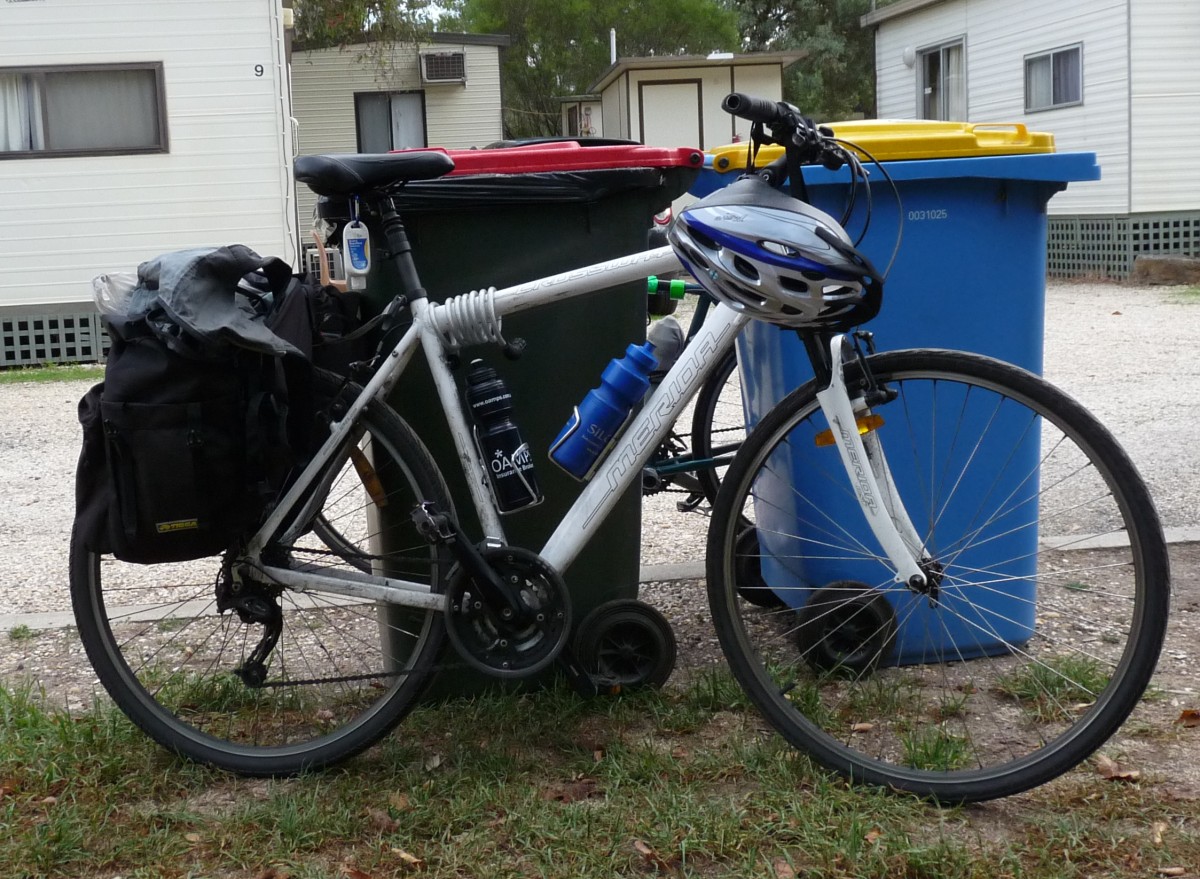 To prove you don’t need to be very fit or have a fancy rig to go touring, here is my $300 hybrid. I happened to be lucky with this bike. The components were OK, except for the wheels which I had to replace after a short time. The Tioga panniers were $70, and I stayed in cabins for between $50 and $70 a night. My sunscreen hangs from the back seat. I haven’t graduated to cleats or pedal clips, which is definitely to my detriment. I can’t go as fast as other people, but I enjoy the scenery and the cycling just as much.

Anne Watson has a bike that the shop said, “Don’t clean it, the dirt is the only thing holding it together.” Anne got away with only one pannier. 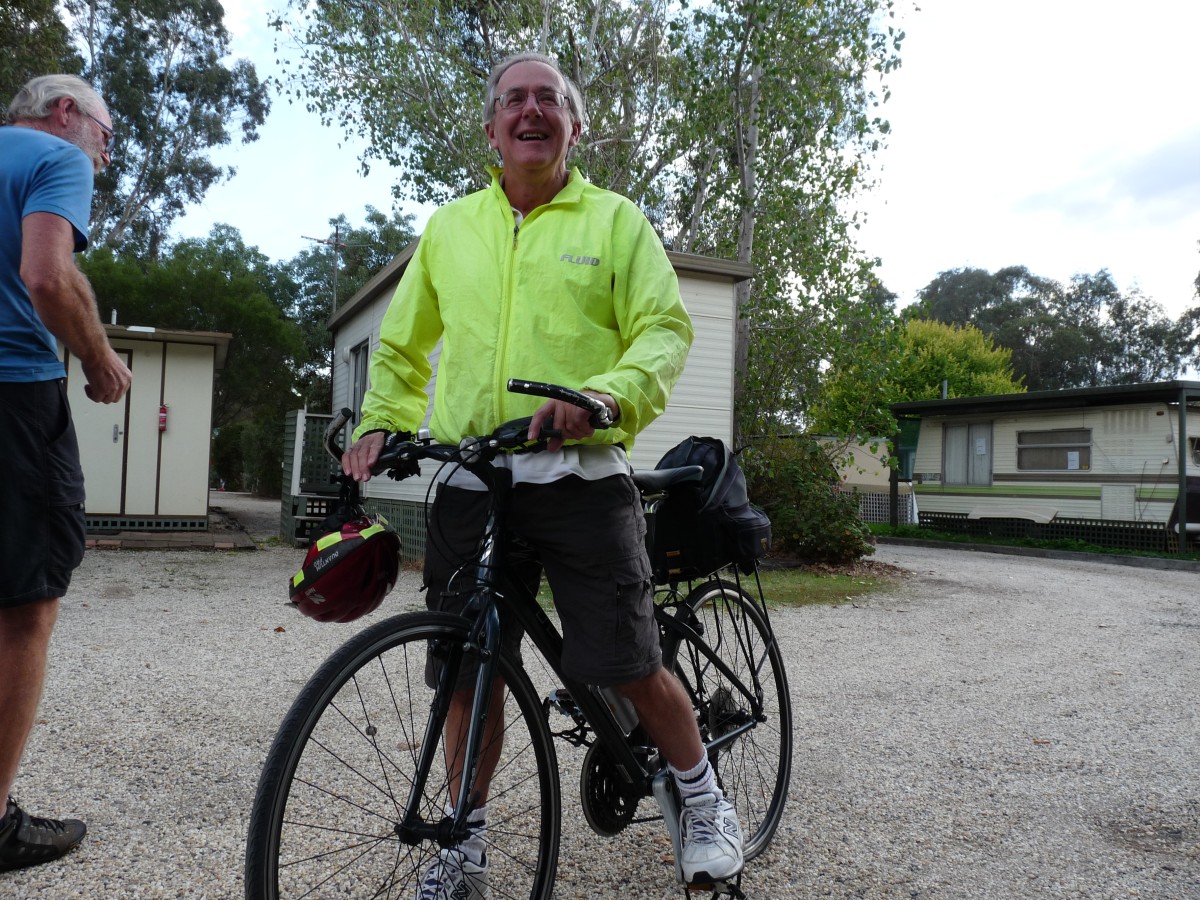 Just to prove how easy you can make it on yourself, here’s Dave Halloran. Dave’s brother Jim came in a car and took Dave’s stuff for him. They both had a great time, and Jim was a welcome member of our group.

For rides where you don’t do a loop, starting and ending at the same place, you sometimes have the problem of how to take bikes from A to B. It is also a bit of an issue for public transport. Some train services have a limit of four bikes, and for buses, it is often up to the discretion of the driver. 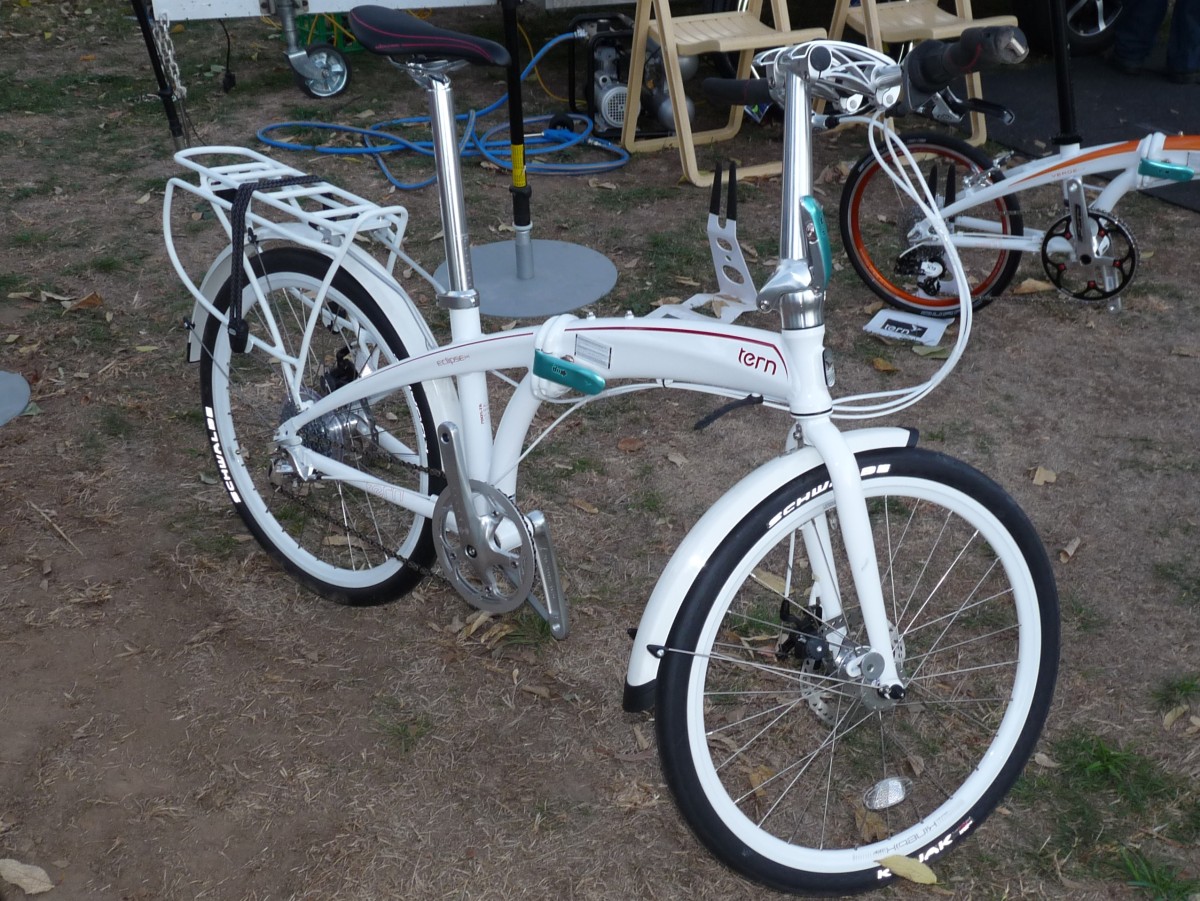 One solution, for an individual, is to use a fold up bike. The one above is a ‘Tern Eclipse’. Other brands that club members have include Dahon, Bike Friday and Brompton. There are others, as an online search for ‘fold up bicycles’ will show.

For supported rides, a bike trailer might be an option. Mike MacDonald hired a covered trailer for the Bourke to Broken Hill trip, and we boxed our bikes.

We saw a couple of bike trailers on the rail trail trip. 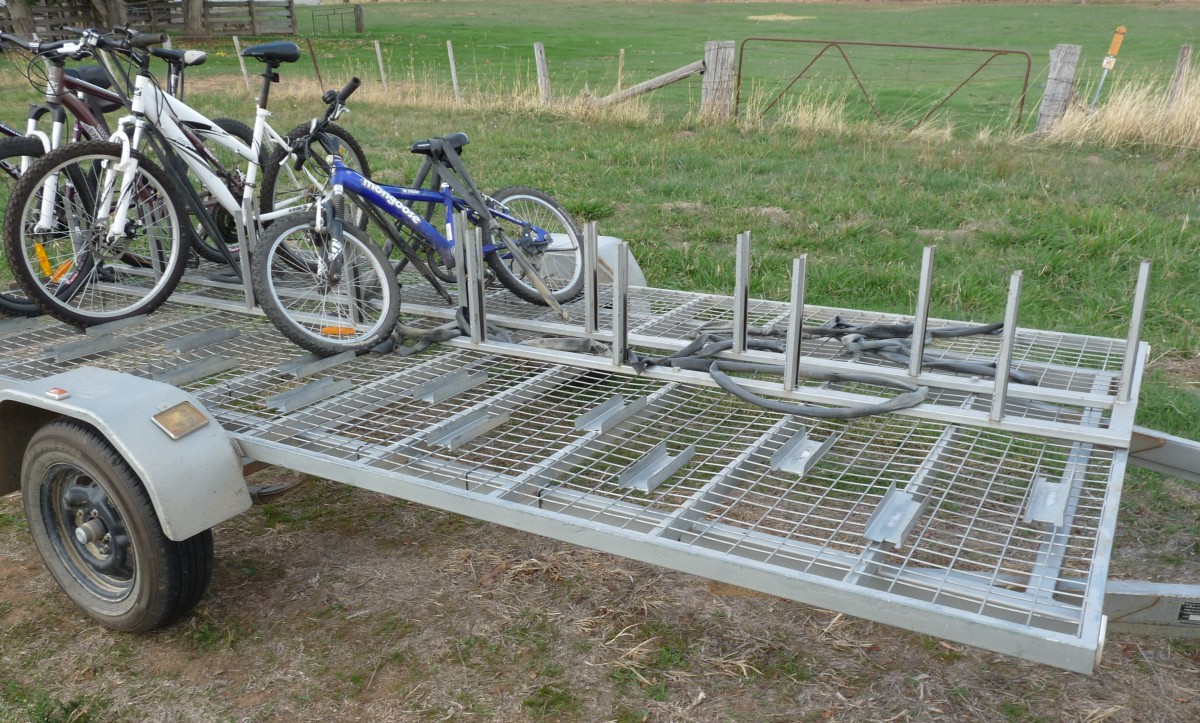 This one is a very basic model. Flat bed trailers like this are not hard to come by, some channel has been welded or bolted on and some supporting posts. Fairly basic. 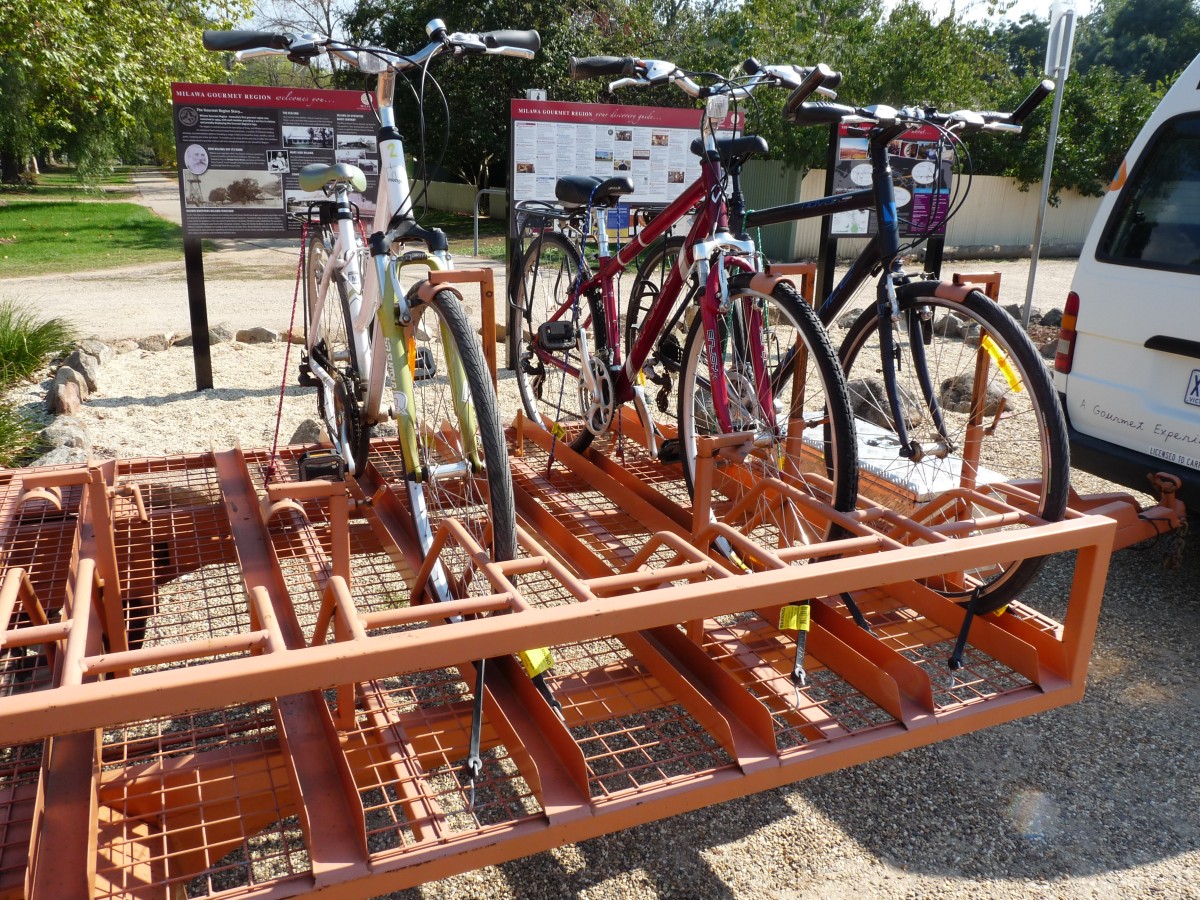 This is a much fancier trailer, attached to a mini bus. It was custom made, with special bolt in attachments to keep bikes secure.

All in all, good preparation is the essence of bike touring. Where you are going to stay, the route, where you will eat and get water are pretty much the basics. Fortunately we have great ride leaders who do the bulk of the arrangements.

You can still modify it to suit yourself.

Next time there’s a weekend tour on, and you think you’d like to go, but are just not that confident, why not ask the ride leader about the trip? Basically the only real requirement is that you and your bike should be able to do 50 to 70 kms in a day, depending on the ride. One of the longer Sunday rides is a good experimental run.

One thought on “Rigs”