13th till 20th April a group from Bike Leichhardt rode two of the trails, connecting between the two with a low traffic road.

Day 0: Getting to Seymour. Buses replaced trains. Arrive in Seymour at night.

Some took the train to Seymour, others took their cars to Wangaratta and booked a short train trip to Seymour. After repeated assurances that the 18:16 service would be a train, it turns out V-Line also replaced that service with a coach. As it was, the driver took our bikes anyway.

Day 1: Mike called for an early 8:00 AM start, with 84 kms to ride. The idea was to arrive in plenty of time for the campers to pitch their tents in the light. 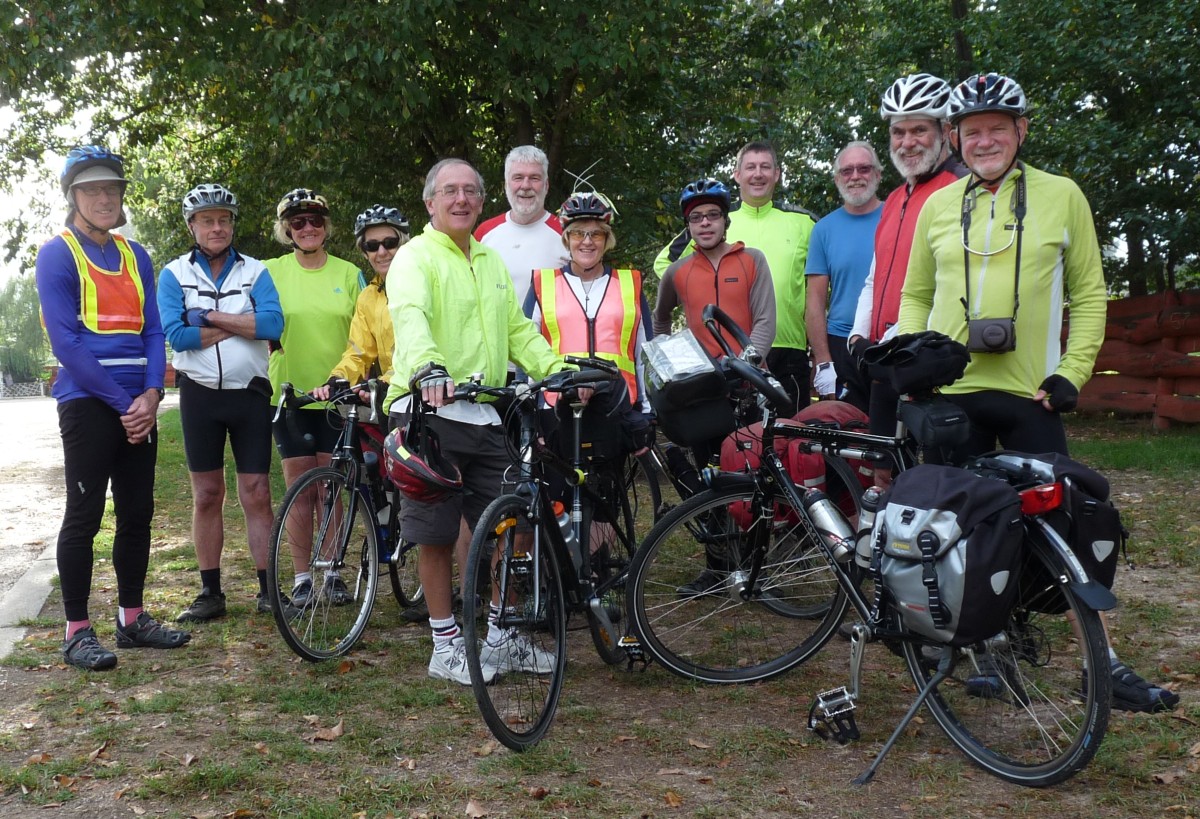 We all had different ‘comfort levels’ in mind for the trip. Mike MacDonald, Jamie and Anne were staying in motels or cabins, John Ross and Grant generally shared a room in pubs or motels. Heather and Norm were able to scout out the best deals, generally in pubs.  Dave Halloran also stayed in accommodation, but Jim, his brother, brought his car to help take luggage.

Hardiest of all were Bruce and Libby, Mike Saunders and Rob Purse.  These plucky people camped. Bruce had a trailer, Mike a third wheel. Rob Purse was able to manage just with front and rear panniers.

The campers were slow to start, not being accustomed to the early rising, packing and cold conditions. After a short muster for photos, we headed off down back streets to the rail trail, which actually starts in the nearby town of Tallarook.

The rail trail goes from Tallarook to Mansfield, with a spur line branching off from Cathkiln to Alexandra. We were going to Alexandra that day, then coming back down the next day to the junction, and then going to Mansfield.

There had been some rain overnight, and the forecast for Monday was not good. 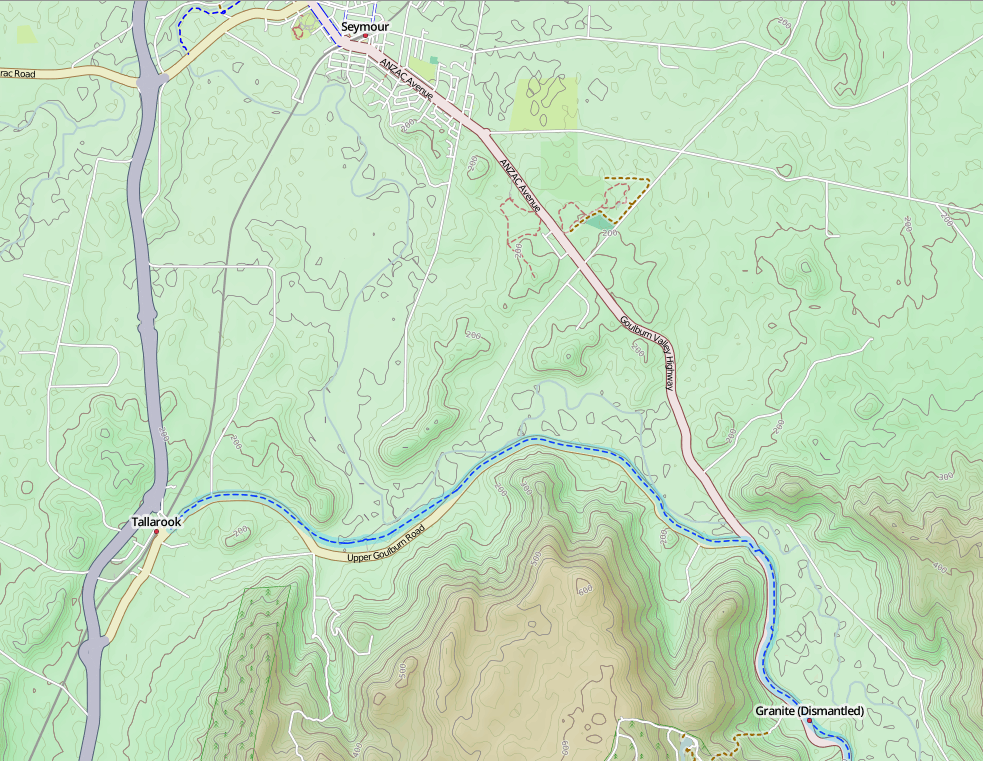 The first hour was spent on back roads getting to the trail.

The rail trail was not completely sealed, a firm gravel surface.  We rode steadily, coffee break was to be at the ‘resort’. After several false signs, a large hotel came into view, near the former ‘Granite’ station.

The hotel had a large stained glass ceiling over the dining room, but we sat in the glassed in area overlooking the trail.

On we rode to Yea for lunch. Just outside Yea was one of those comic figure boards, where you can poke you head through to get a photo. Much amusement as we regressed to childlike simplicity. 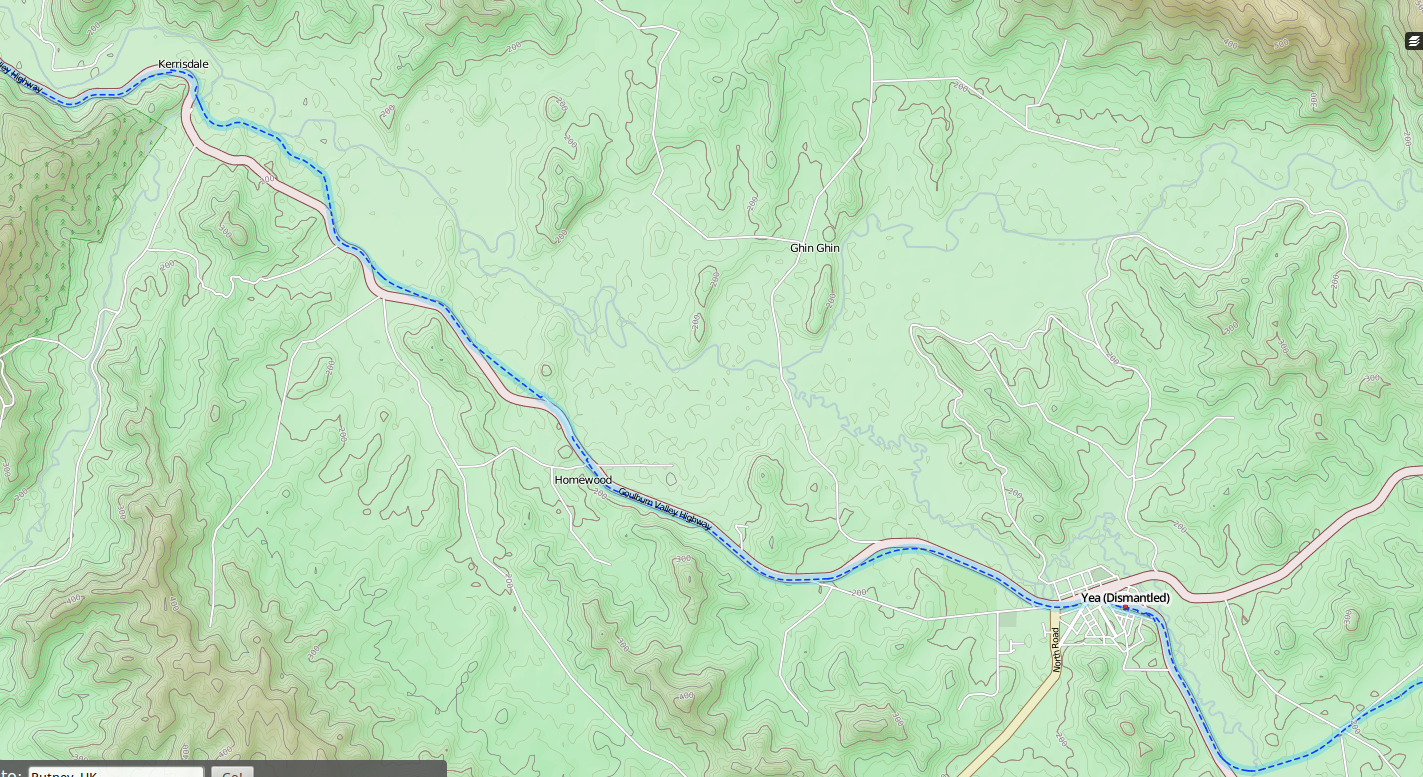 Outside of Yea lies a climb to the Cheviot tunnel. On the way a brown snake crossed our path, and had a discussion with cyclists from Queensland, on an organised tour. 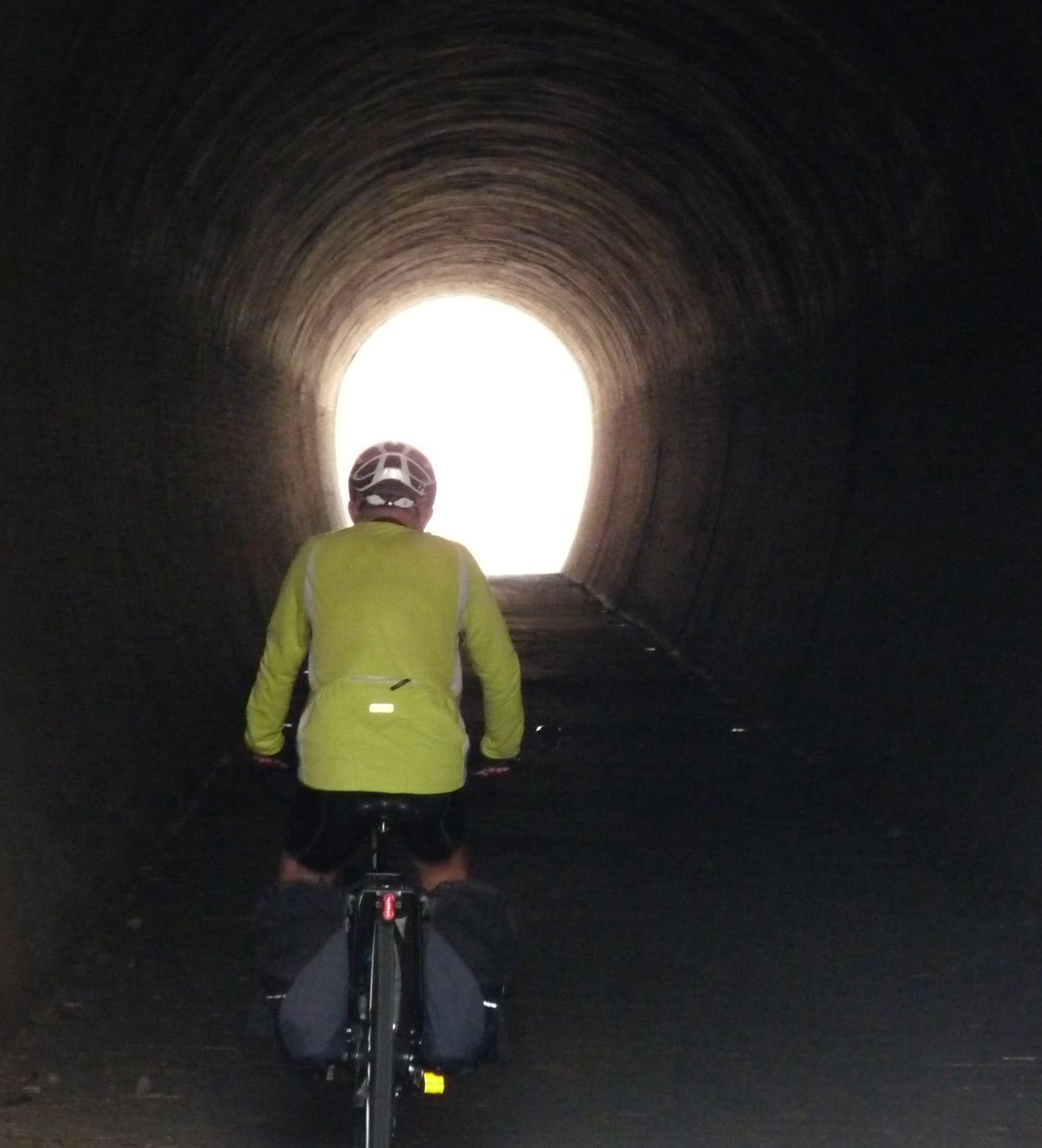 Catkiln was the junction point, where the spur line ran up hill to Alexandra. Being a rail line, apparently the maximum grade is three percent, which made the climb easy but relentless. 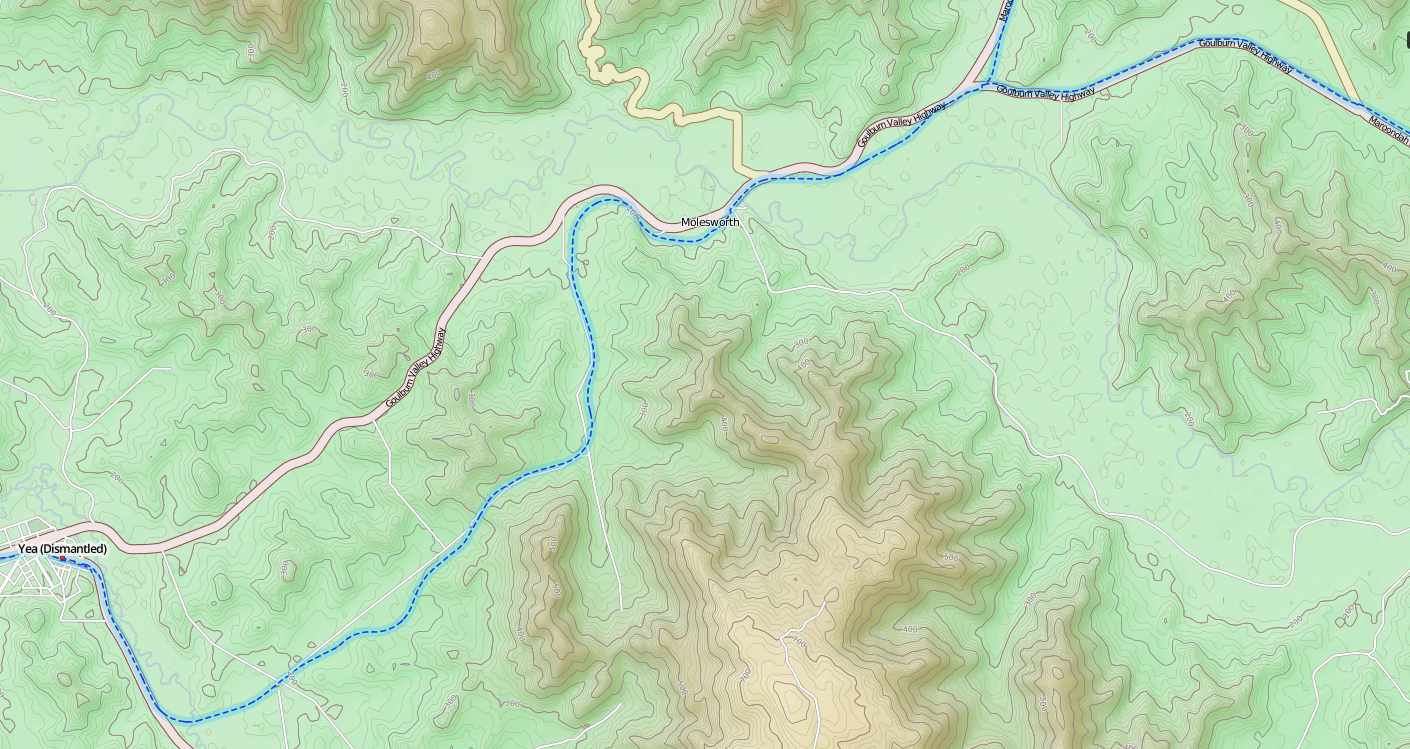 At the top of the pass just outside Alexandra is a magnificent view. 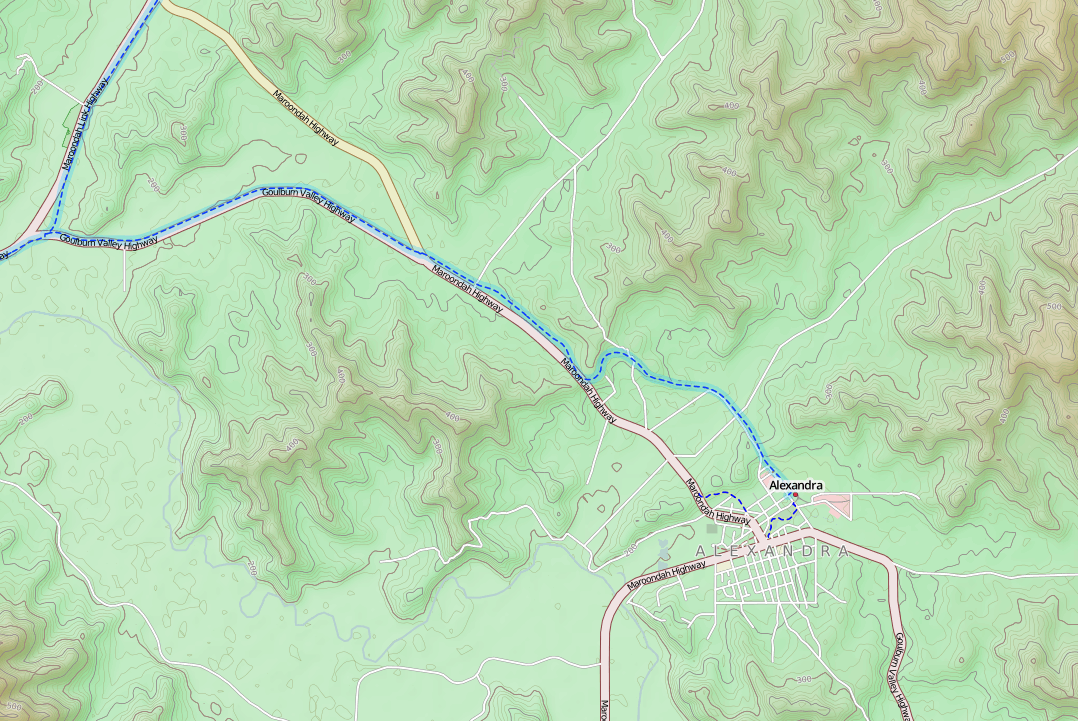 Again we were to start early, with a 74 km ride ahead of us. Mike MacDonald had several threats of four AM phone calls in retaliation for the previous days early calls.

We were to go back down the spur line to Cathkiln, then out to Mansfield. The first part was an easy ride downhill. Coffee at a place called Yarck.

The rail trail is very interesting in the way it goes through extensive cuttings, away from the road.

Lunch was in Bonnie Doon, in the park beside a big roadhouse. We learnt the next day the power was to be cut off for the whole area. 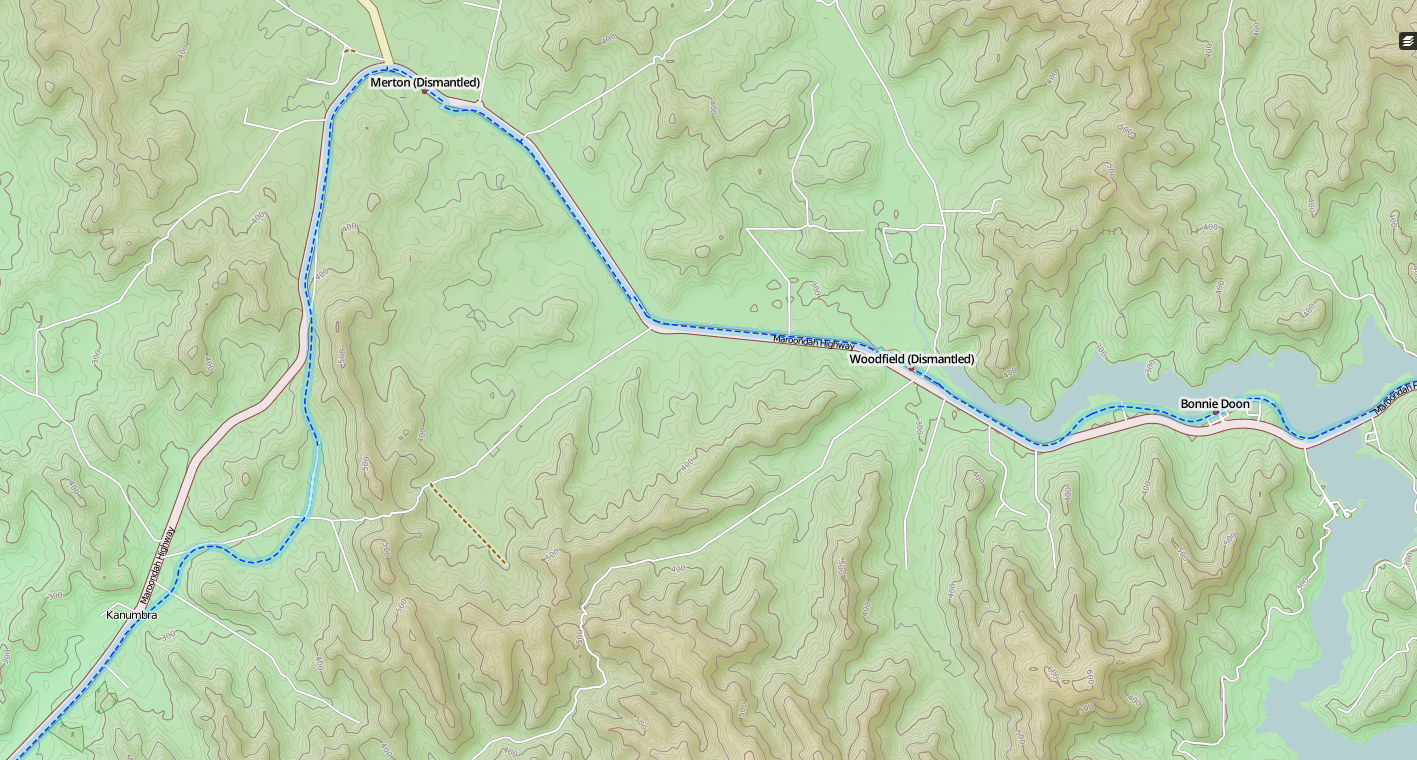 The roadhouse advertised ‘Serenity Burgers.’ It wasn’t till later that we twigged that this was a reference to the film ‘The Castle’, where the family have a holiday house at Bonnie Doon on Lake Eildon. “How’s the serenity?”

After Bonnie Doon we crossed the tail of Lake Eildon on an impressive 300 metre long bridge. 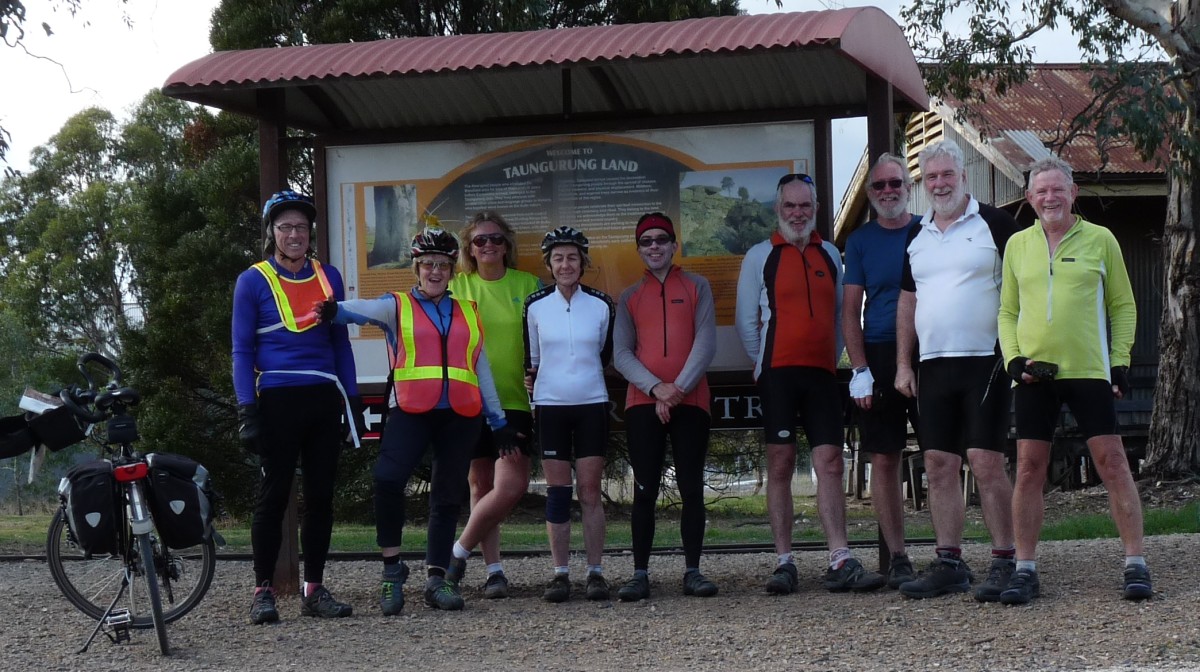 Jamie and Mike were able to score a two bedroom house at the caravan park in Mansfield, with a spa.

As the power was going to be off, we were able to work out which places were going to be shut. As it was, the IGA and the bakery had their own generator, so that made things easier. Heather rode out to a place called Sawmill on the way to Mt Buller, John Ross rode up to the summit of Buller.

Mansfield was the beginning for us of the Kelly Country tour. The centre of town has a roundabout with a large monument to the murdered policemen, killed by the Kelly gang. The monument was erected by Mansfield citizens, which contradicts the idea that the Kelly gang had widespread support and the police were reviled, at least by all sections of the population.

Near Mansfield is Stringybark Creek, where the police were shot.

That night Jamie and Mike hosted a barbeque at their luxury villa.  It was great fun. 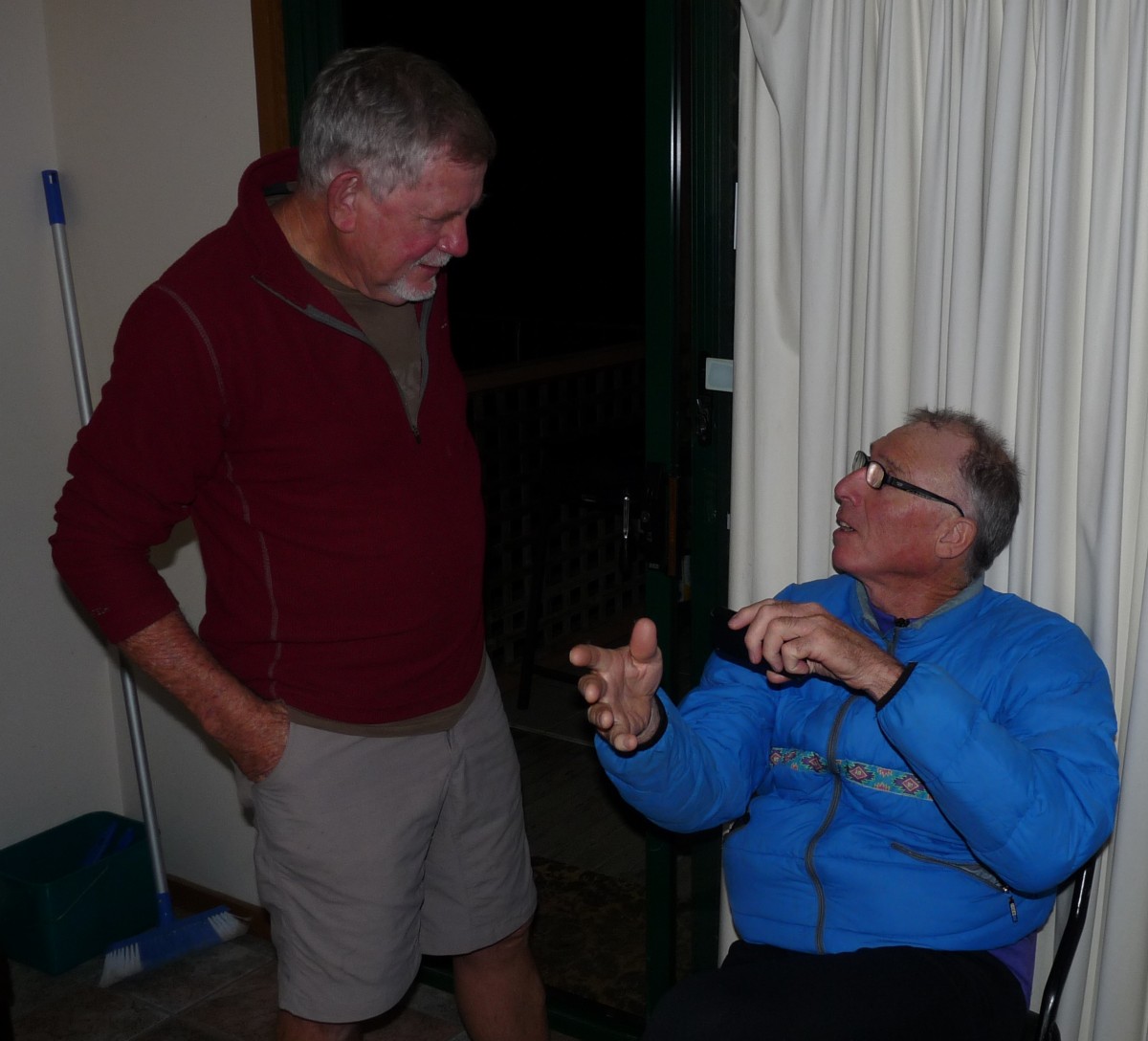 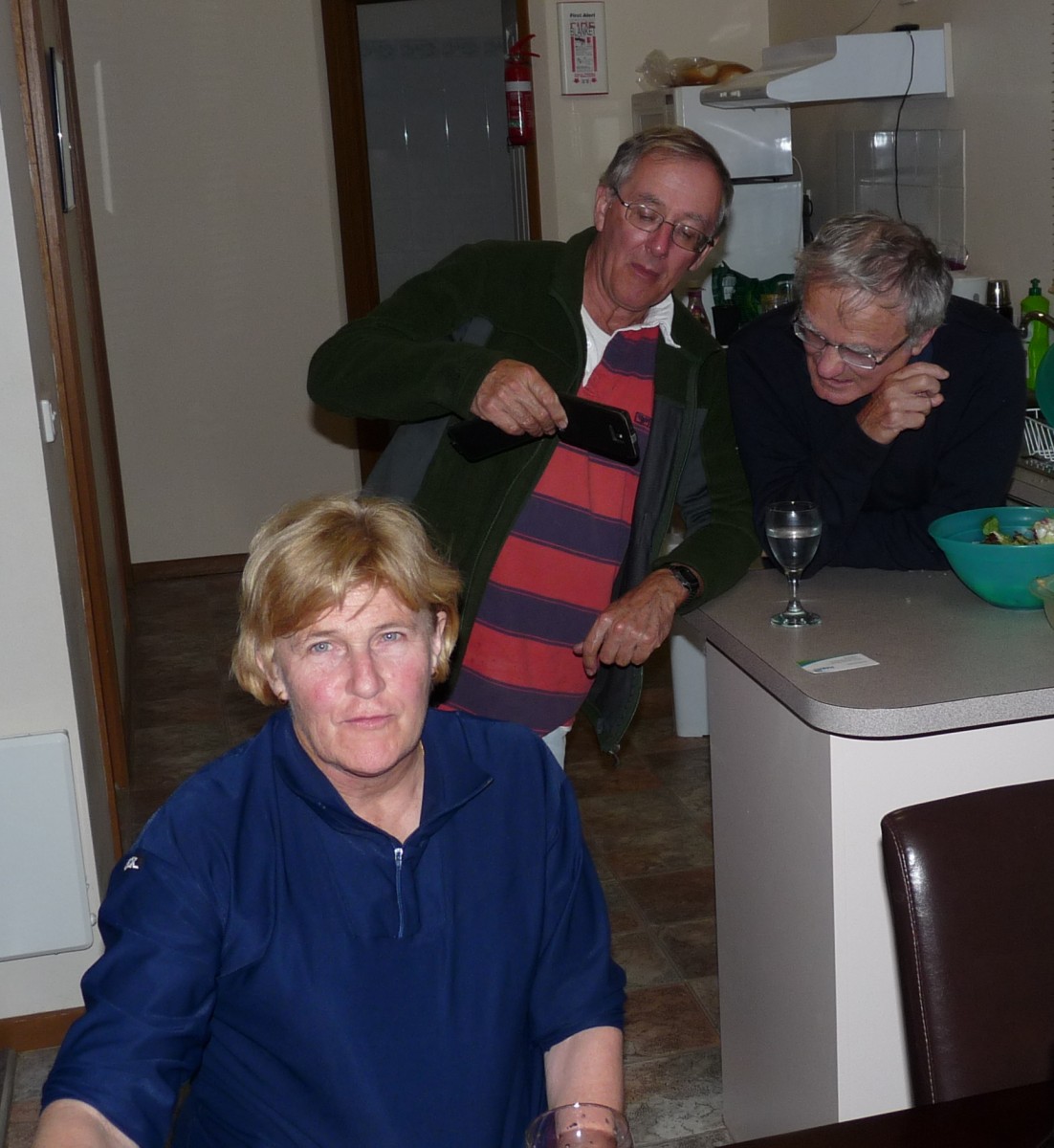 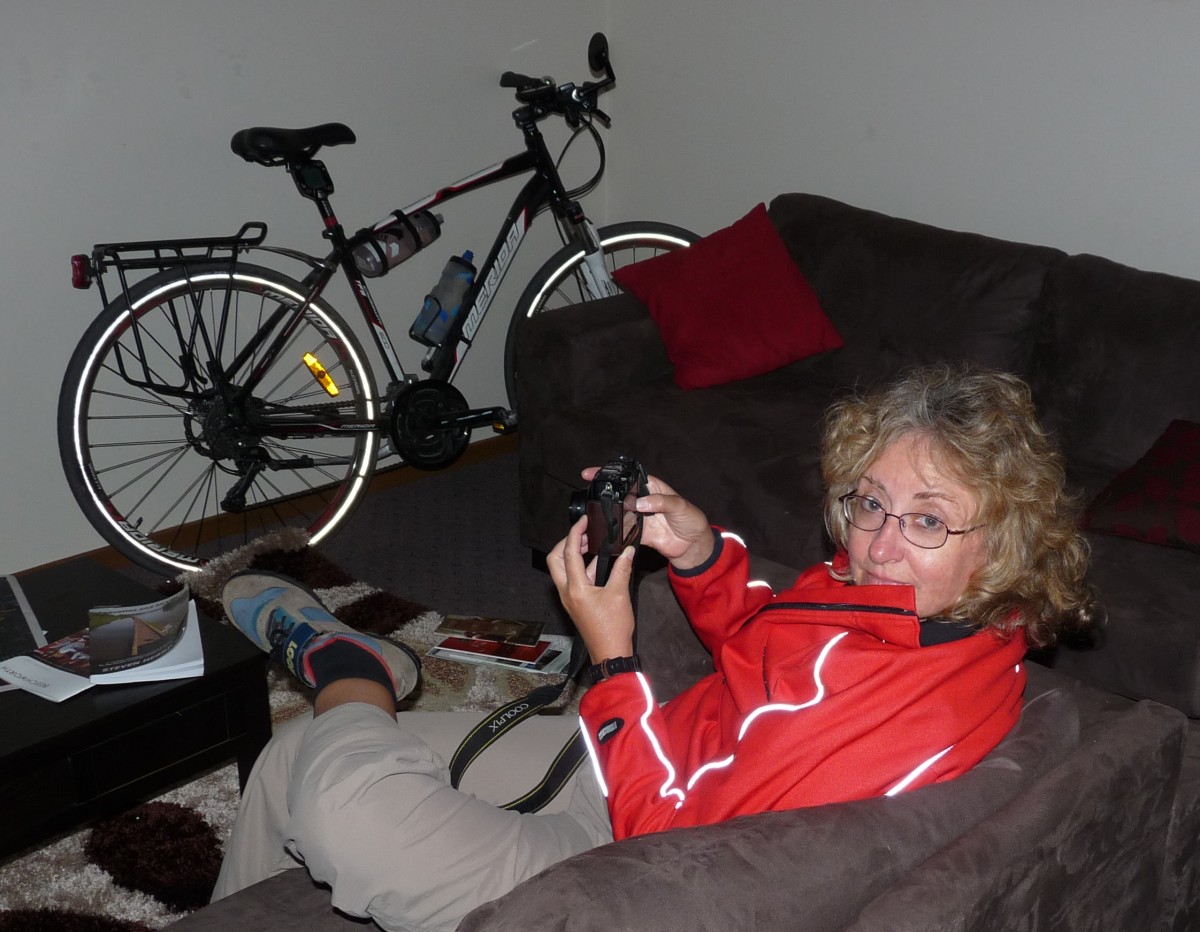 We were to leave the Mansfield rail trail and head to the Wangaratta Beechworth trail, via the King River Valley and the town of Whitfield.

The requires a steady climb to Tolmie and Toombullup. There was some confusion as to whether we passed through Tolmie, or was it a off a side road. 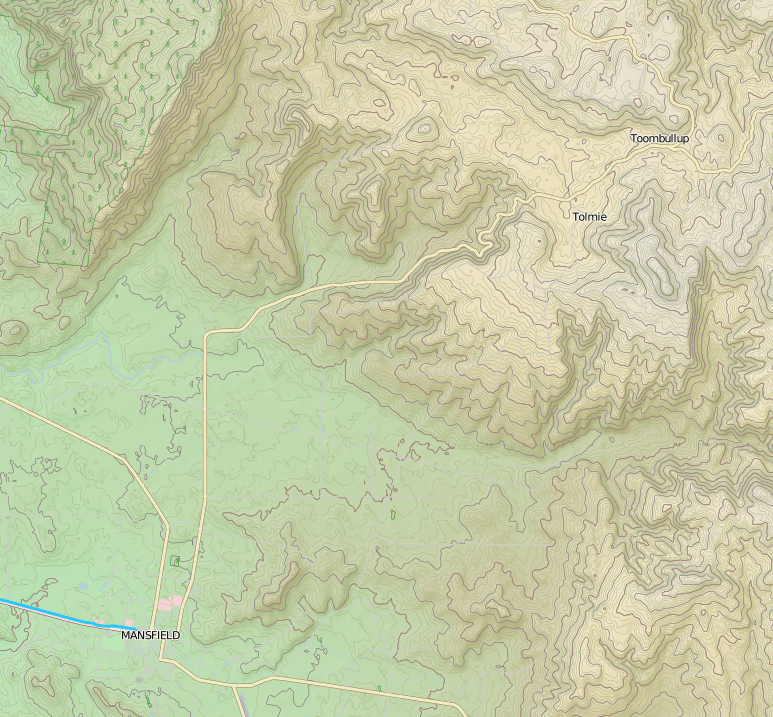 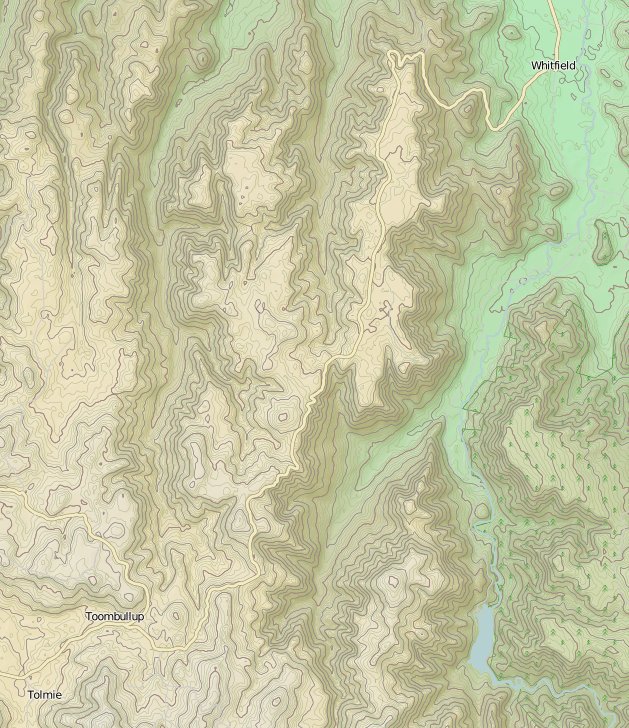 Stringybark Creek. where the police were murdered by the Kelly gang was just near Tolmie. As we had a rest stop opposite a cottage, we chatted with the occupant. He was an artist, his ‘grim reaper riding a motorcycle’ was on display in his garden. 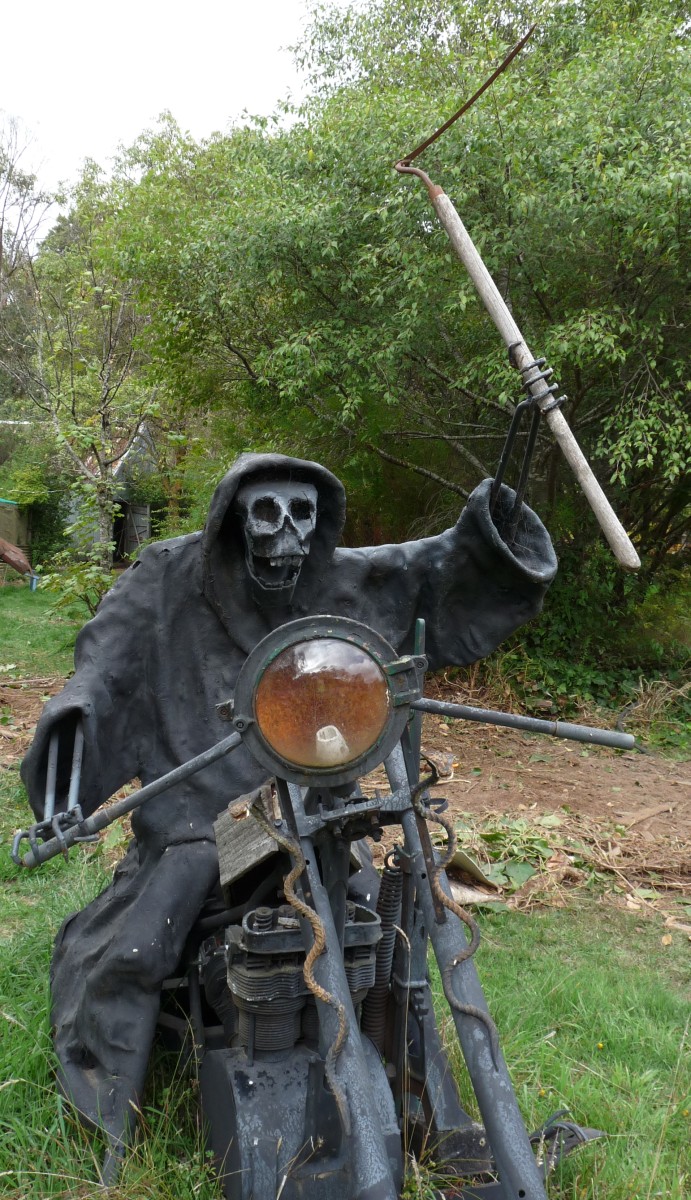 We travelled along a ridge line for some time, not really climbing much or descending, before we came to a turnoff for Power’s Lookout.

This was down a 3km dirt road, which not everyone was keen to go down. As it was, it was two spectacular lookouts over the King River Valley. 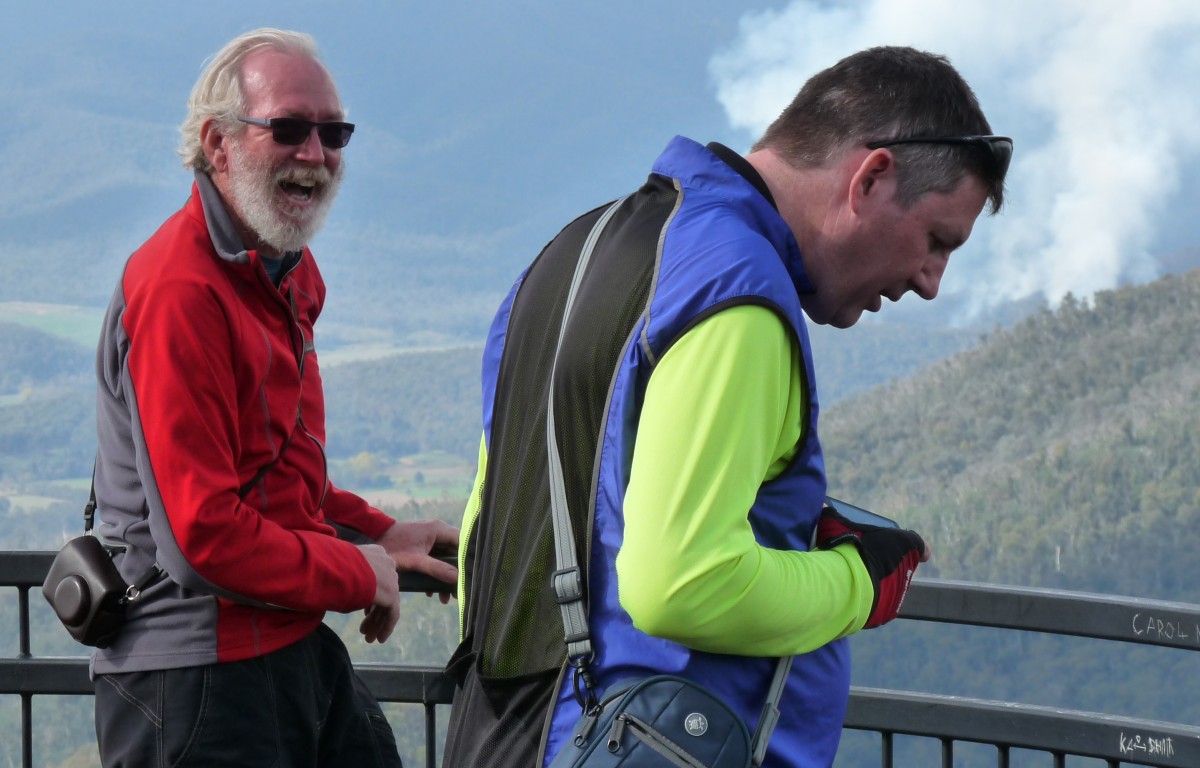 The lookout was named after bushranger Harry Power. He chose the sight so he could see and hear who was coming, the geese in the valley below giving warning.

Harry Power was caught one rainy night, having been sold out for his reward. After a long criminal career, mostly spent in gaol, Power became a tour guide on the former prison hulk ‘Success’.

After lunch at the lookout, the road to Whitfield was a dramatic and exhilarating descent.

Once again the Bike Leichhardt accommodation bar had been raised by tour leader Mike MacDonald, who arranged Jesse’s Creek Cottage for himself, Anne and Jamie.

We all had dinner there that night, lasagna, chicken and dessert.  Carla, our host, was a member of the Pizzini family.

The ride was flat along the floor of the King Valley. As we rode along, some artistic hay bales caught our eye. 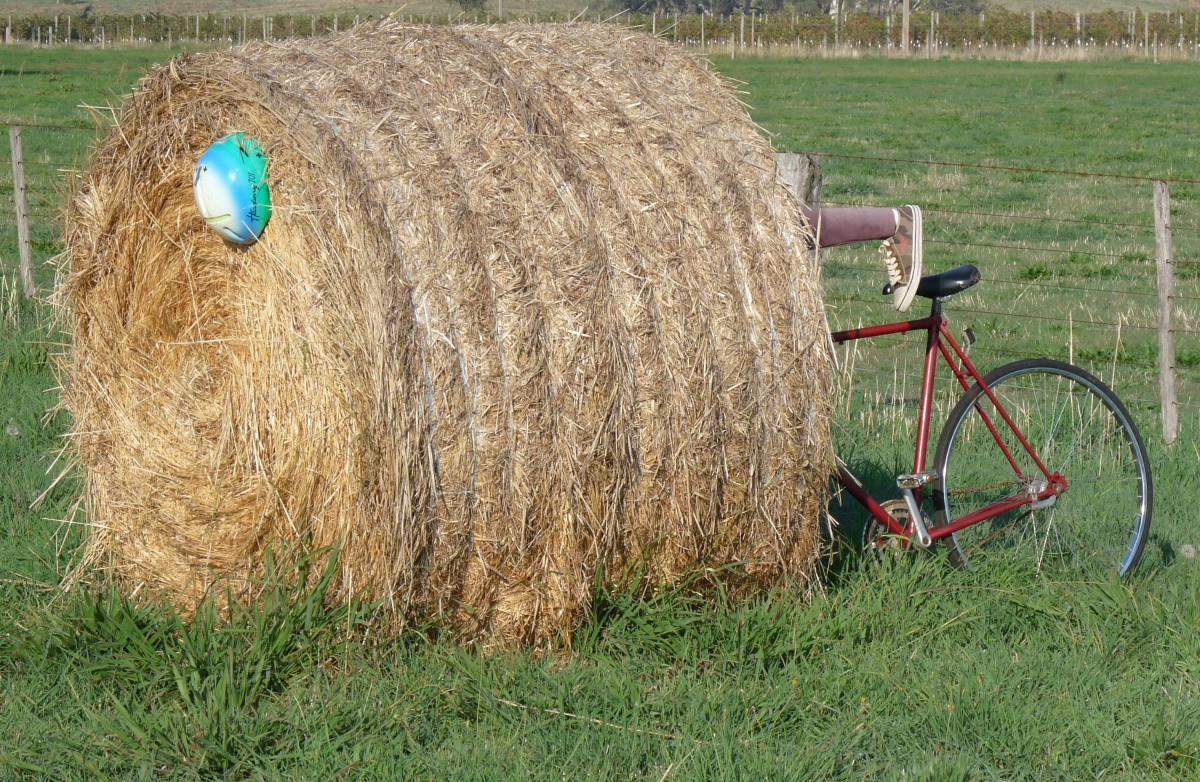 A rail line had existed along the road at some point, with the flat way and station signs.

Coffee at the Sam Miranda Vineyard, which was declared to be the best coffee of the trip.

As we rode along, we discovered that the area had a scheduled power blackout that day. We feared the blackouts were following us! 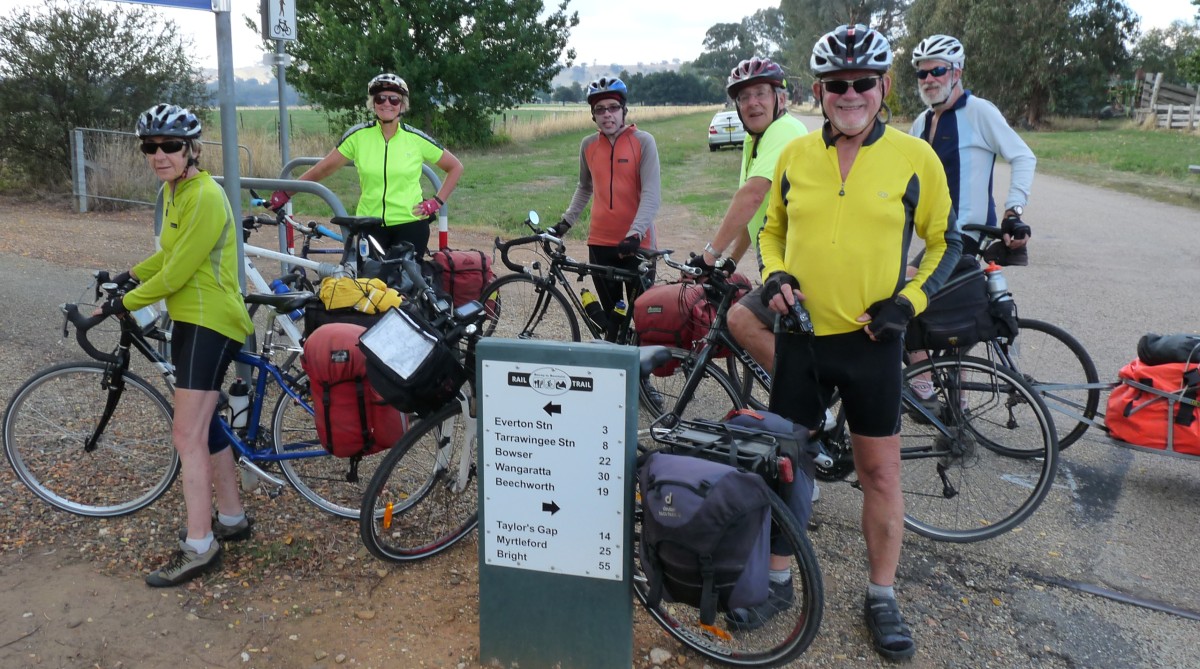 Lunch was in Milawa, with most of us stopping at the Milawa cheese factory. Not all of us were keen to try the $18 pack for three little cheeses. However, pies, rolls, cakes and coffee were available for reasonable prices.

As we rode on, evidence of the former tobacco industry was present, with tin sheds kilns.

The ride was flat until the last 16 km slow climb up to Beechworth. Some had great fears of this section, with some shaking of heads. As it was, most acknowledged the cooler weather and the previous days of exercise having helped us.

For most of us Beechworth was the last real climb of the trip, already our thoughts were turning to work, or the next stages of the trip for those going on.

Mike Saunders and Rob Purse were going on to Mt Beauty, Heather and Norm were going back the Wangaratta the next day. Bruce and Libby were going to Albury instead of Wangaratta.

Bob Moore wasn’t able to join us this ride, Johnathan Epstein had been in the area for a few days and met up with us. Phillip and Meredith also met us in Beechworth. 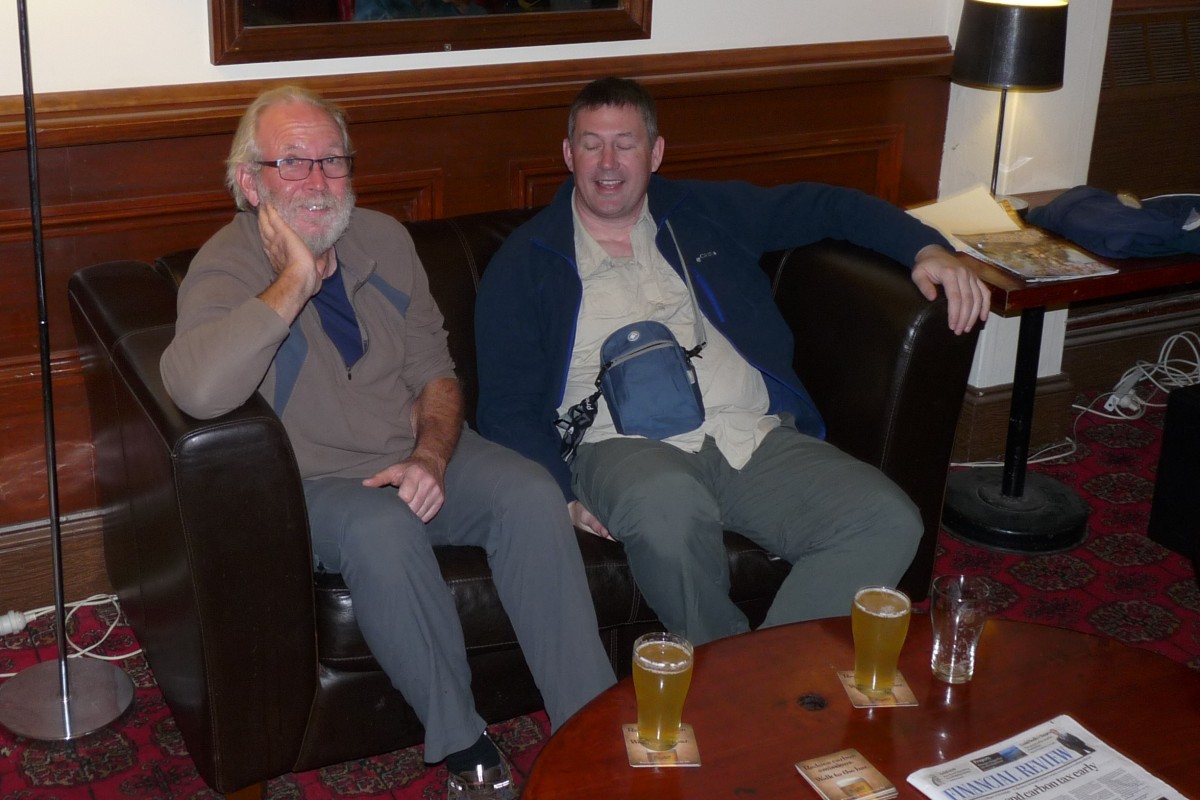 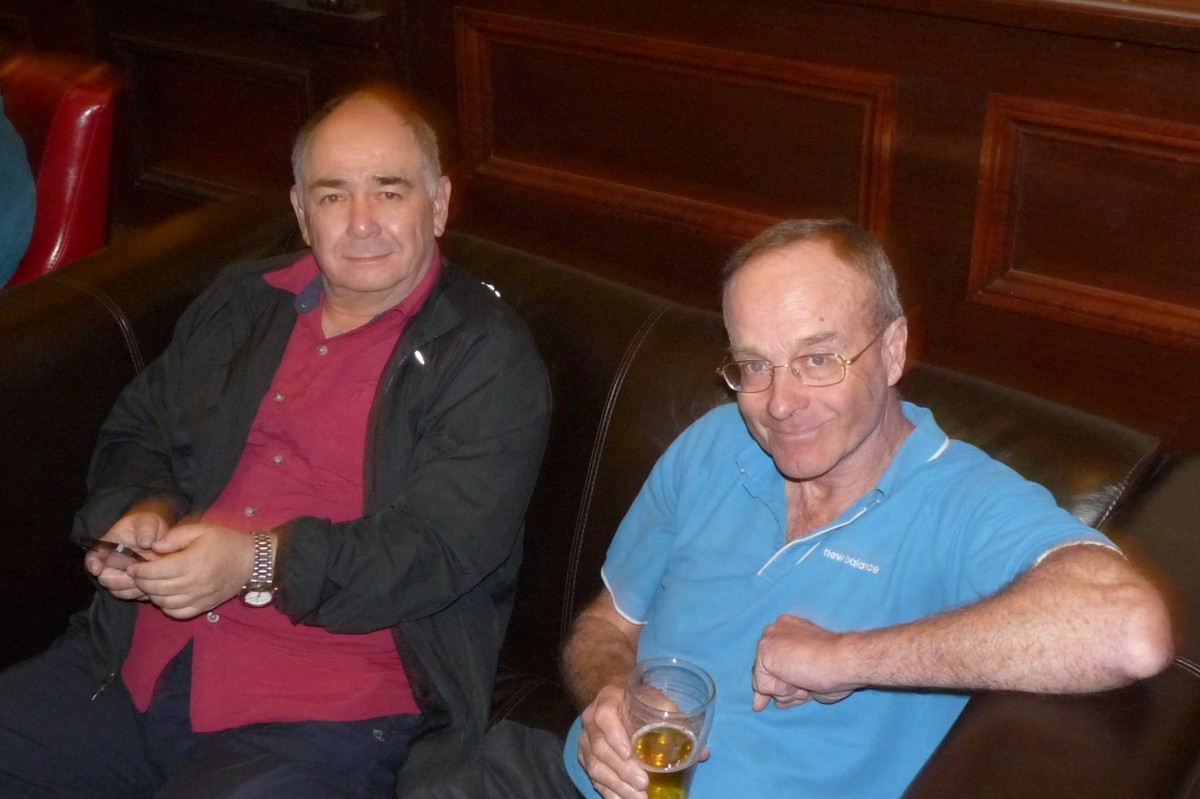 That night we ate at the hotel in the back room. Mike MacDonald introduced us to “Kelly’s Rules” for pool, which provided some amusement and good natured ribbing.

This was to be a rest day, before the final day downhill to Wangaratta.

As it happened, a bike race called the Gran Fono was scheduled for the Saturday, so on the Friday a number of marquees were set up, for coffee, food and bike merchandise.

Grant decided to cycle to Bright, John and Jamie went to Myrtleford.

At Myrtleford, there is an historic tobacco kiln on display. It must have been erected around 2006, before the tobacco growing was completely stopped. Not for any health reasons, the two large tobacco companies bough out the remainder of their contracts, it was cheaper to bring in overseas tobacco.

The scale of money involved is staggering. “A report being prepared by accountants PriceWaterhouseCoopers estimates that Australia’s illegal tobacco trade is worth nearly half a billion dollars a year. Victorian growers typically received $700 for a 100 kilogram bale of leaf. By the time that same tobacco found its way to the shops, the Federal Government had reaped a staggering $30,000 in excise. At harvest time, the Victorian Tobacco Growers Cooperative held $1 billion in excisable product behind its 28 strand electric fence.” Landline.

At Myrtleford, John Ross found a bike shop who was able to give invaluable assistance with his bike setup. I had advice that the road to Stanley wasn’t too bad, so I decided to go back to Beechworth that way. 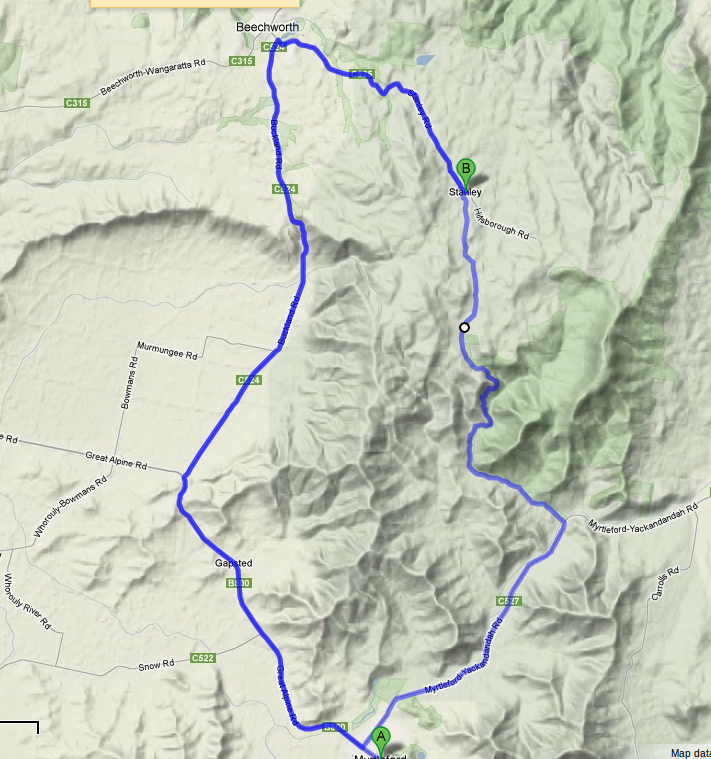 Despite some steep grades, I found the road was completely sealed.

The town of Stanley and the surrounding orchards interesting.

Five of us set off back to Wangaratta, with Mike MacDonald opting to spend more time pottering around in Beechworth.

As we reached Bowser, the evidence of highways, large scale commercial life and the demands of modern ‘civilisation’ tore at us.

We passed the Clay Shooters Club on the way in, meeting cyclist Matt, who we had seen previously in Whitfield.  http://www.wangclaytarget.com.au/history.html

A last lingering coffee at the Cafe Derailleur http://www.cafederailleur.com.au/ before breaking up. 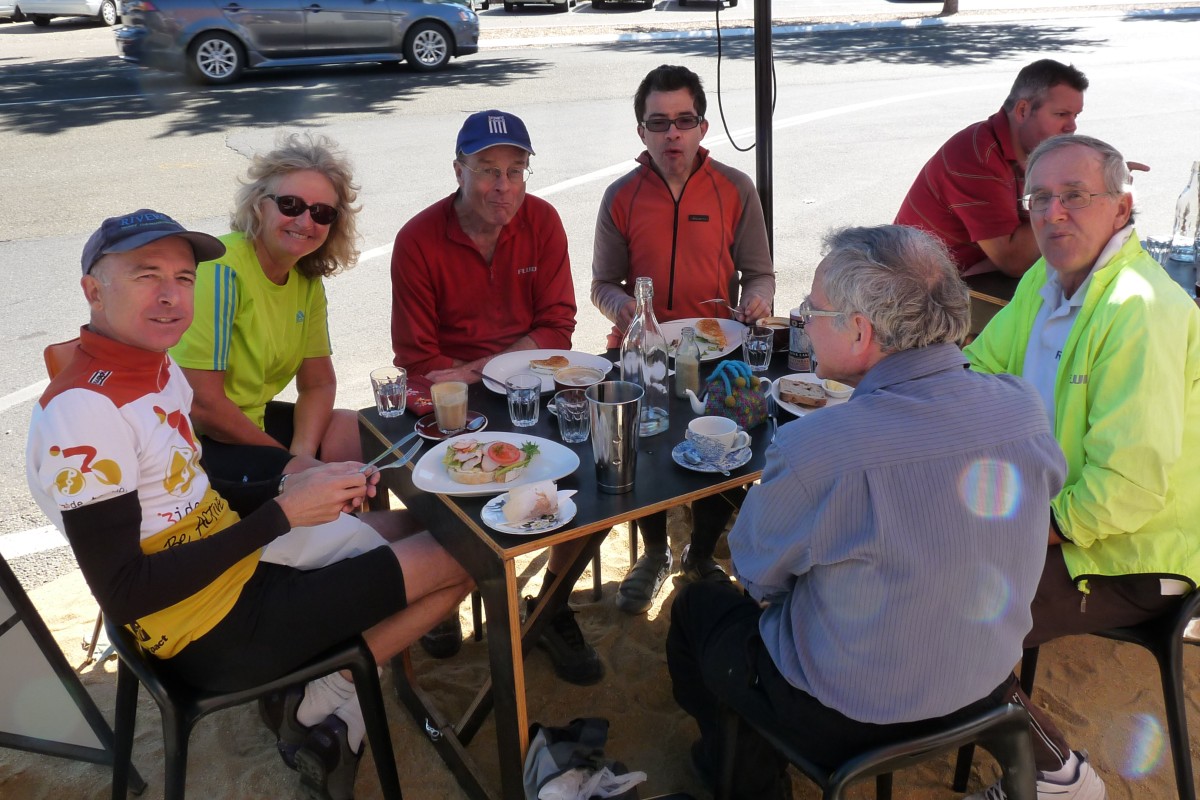 Truly a great ride, and many thanks to ride leader Mike MacDonald for organising such a fantastic trip.